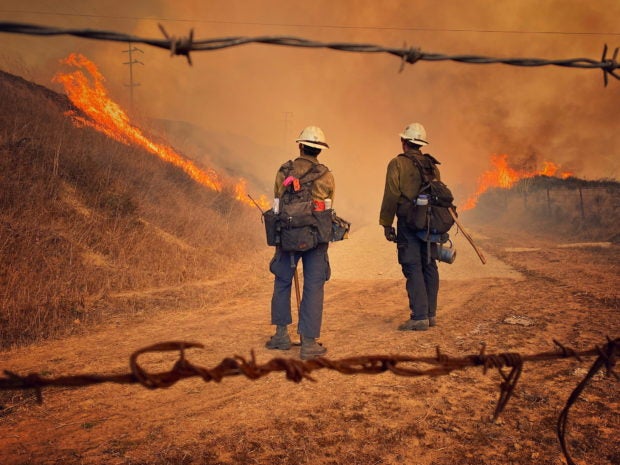 STOWE, United States — Jennifer Cashman and her family lost virtually everything when their house in Paradise, California was razed by a wildfire — forcing them to join the growing ranks of climate migrants around the world.

They moved 3,000 miles (4,800 kilometers) to a new life in Vermont on the other side of the United States, far from the annual danger of fast-moving fires worsened by climate change.

“Our house and our business were completely gone. And it happened so fast, that we weren’t able to really get anything out of the house except for ourselves,” Cashman said.

“We had a suitcase each. That’s all we had to our name.”

The fire that tore through Paradise in 2018 killed 86 people and ruined nearly 19,000 buildings in just one day.

On the advice of a friend, the Cashman family went to visit Stowe, a small town in Vermont, and moved there with the help of insurance money in January 2019.

“We knew when the fire came that we were done; I could not live in California anymore,” the 47-year-old said.

Repeated evacuations had left their scars.

“It was the fear of every time you smell smoke. Are we going to be OK? And having my son scared even if you lit a fire in the fireplace; he was afraid of it,” said Cashman.

“You know, the whole family’s in therapy right now to deal with the trauma. My daughter suffers from really bad nightmares.”

Eight of the 10 largest fires ever recorded in California have occurred since 2017, as a punishing drought, sparked by human-caused global warming, leaves forests dry and flammable.

California, once a dream destination for millions and home to the world’s fifth-largest economy, now faces climate migration — a phenomenon previously only associated with poor, low-lying Pacific atolls threatened by rising seas or with arid areas in developing countries.

The heating planet is making refugees even in the world’s wealthiest countries.

“Wildfires cause mass displacement, and because these wildfires are exacerbated by climate change, I think that we can start to think about these broad-scale movements as an aspect of climate migration,” says Rebecca Miller, a researcher at the University of Southern California (USC) with the “West on Fire” project.

According to the Internal Displacement Monitoring Center, a Norwegian NGO, wildfires have forced an average of more than 200,000 people to leave their homes each year over the past decade.

Nearly three-quarters of them were in the United States, the vast majority in California.

‘Raising kids in a disaster zone’

Another “climate refugee” from Paradise, Jessica Distefano, still cries when she thinks about the fire that burned her out of her home.

“I just felt like I was raising my kids in a disaster zone. Everything around us was burnt,” she tells AFP from her new home near Boise, Idaho, three years after fleeing Paradise as it was almost wiped off the map by the ferocious blaze.

The decision to leave Paradise was less clear-cut for Maria Barbosa, who says she was at first determined to rebuild after the blaze destroyed her home.

“But as I researched and found out what it was going to take — a woman by herself — it just seemed overwhelming.

“It seems like a lot of my friends that are my age or older are opting to go elsewhere.”

Barbosa, who now lives in a much lower-risk area of Idaho, around 1,000 miles from her old home, says she enjoys going back to visit Paradise, but she knows she could never live there again.

“You don’t feel comfortable. Like it would be a constant threat to you every time. Every time there’s a wind or a smell of smoke, it comes back.”

Each story has its own unique heartbreak, but, says Nina Berlin, who researches human behavior in wildfires at Stanford University, they all have a common thread — one that will become increasingly familiar as the planet gets hotter.

“Households are moving toward a tipping point where the factors that are rooting them in place, like their family, like their jobs, like their access to the outdoors, are outweighed by the impacts of wildfire and smoke,” she said.

“We’re looking at migration as one adaptation strategy among many that individuals might engage in, in order to ideally reduce the exposure to those risks.”