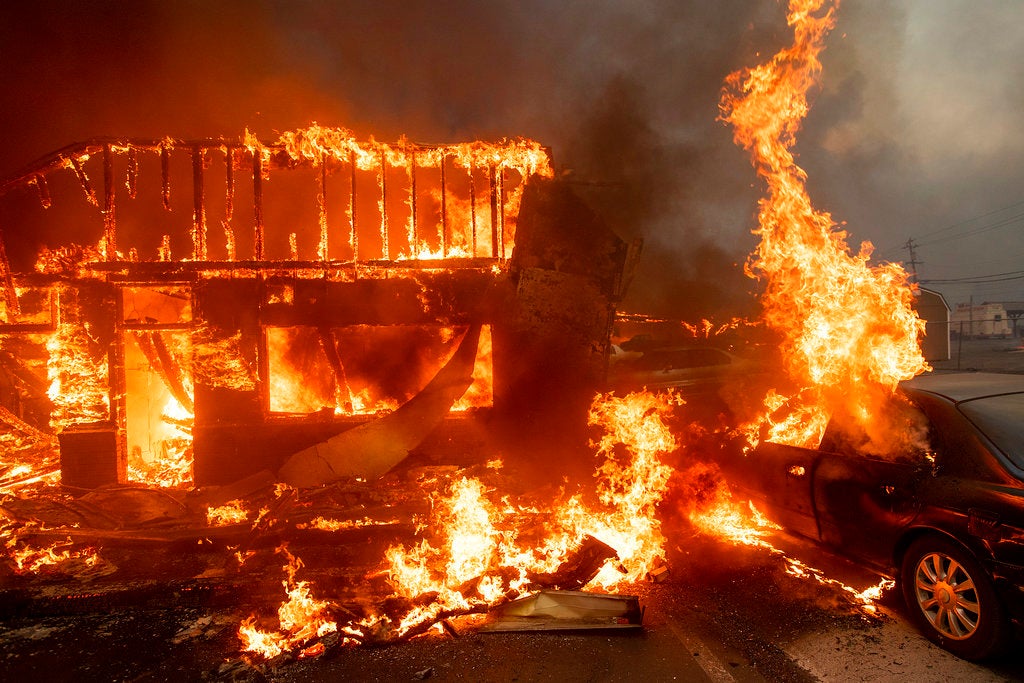 Flames consume a car and building as the Camp Fire tears through Paradise, California, on Thursday, Nov. 8, 2018. AP PHOTO/Noah Berger

PARADISE, California— Tens of thousands of people fled a fast-moving wildfire Thursday in Northern California, some clutching babies and pets as they abandoned vehicles and struck out on foot ahead of the flames that forced the evacuation of an entire town and destroyed hundreds of structures.

“Pretty much the community of Paradise is destroyed, it’s that kind of devastation,” said Cal Fire Capt. Scott McLean late Thursday. “The wind that was predicted came and just wiped it out.”

McLean estimated that a couple of thousand structures were destroyed in the town of 27,000 residents about 180 miles (290 kilometers) northeast of San Francisco, where residents scrambled to flee. The extent of the injuries and specific damage count was not immediately known as officials could not access the dangerous area.

As she fled, Gina Oviedo described a devastating scene in which flames engulfed homes, sparked explosions and toppled utility poles.

“Things started exploding,” Oviedo said. “People started getting out of their vehicles and running.”

An Associated Press photographer saw dozens of businesses and homes leveled or in flames, including a liquor store and gas station.

“It’s a very dangerous and very serious situation,” Butte County Sheriff Kory Honea said. “I’m driving through fire as we speak. We’re doing everything we can to get people out of the affected areas.”

The blaze erupted as windy weather swept the state, creating an extreme fire danger. A wind-whipped fire north of Los Angeles in Ventura County burned up to 15 square miles and at least one home in a matter of hours. It threatened thousands of homes and prompted evacuations of a mobile home park, a state university campus and some neighborhoods. A nearby blaze was smaller at about 2 square miles but moving quickly.

Shari Bernacett said her husband tried to get people to leave the Paradise mobile home park they manage. He “knocked on doors, yelled and screamed” to alert as many residents as possible, Bernacett said.

“My husband tried his best to get everybody out. The whole hill’s on fire. God help us!” she said before breaking down crying. She and her husband grabbed their dog, jumped in their pickup truck and drove through flames before getting to safety, she said.

Terrifying videos posted on social media showed cars driving along roads that looked like tunnels of fire with flames on both sides of the road.

Concerned friends and family posted frantic messages on Twitter and other sites saying they were looking for loved ones, particularly seniors who lived at retirement homes or alone.

Among them was Kim Curtis, who was searching for her grandmother, who told family at 8 a.m. Thursday that she would flee her Paradise home in her Buick with her cat. Her grandmother, who is in her 70s and lives alone, never showed up at a meeting spot in Chico, though.

“We’ve just been posting all over social media. And just praying for a miracle, honestly,” said Curtis, who lives in Salt Lake City, Utah.

Officials were sending as many firefighters as they could, Cal Fire spokesman Rick Carhart said.

“Every engine that we could put on the fire is on the fire right now, and more are coming,” he said. “There are dozens of strike teams that we’re bringing in from all parts of the state.”

The sheriff confirmed reports that evacuees had to abandon their vehicles. Rescuers were trying to put them in other vehicles, he said.

“We’re working very hard to get people out. The message I want to get out is: If you can evacuate, you need to evacuate,” Honea said.

The wildfire was reported around daybreak. Within six hours, it had grown to more than 26 square miles (69 square kilometers), Gaddie said.

Thick gray smoke and ash filled the sky above Paradise and could be seen from miles away.

Fire officials said the flames were being fueled by winds, low humidity, dry air and severely parched brush and ground from months without rain.

“Basically, we haven’t had rain since last May or before that,” said Read, the fire chief. “Everything is a very receptive fuel bed. It’s a rapid rate of spread.”

At the hospital in Paradise, more than 60 patients were evacuated to other facilities and some buildings caught fire and were damaged. But the main facility, Adventist Health Feather River Hospital, was not, spokeswoman Jill Kinney said.

Some of the patients were initially turned around during their evacuation because of gridlocked traffic and later airlifted to other hospitals, along with staff, Kinney said.

The National Weather Service issued red-flag warnings for fire dangers in many areas of the state, saying low humidity and strong winds were expected to continue through Friday evening.