P362M worth of smuggled vegetables seized in Subic freeport destroyed 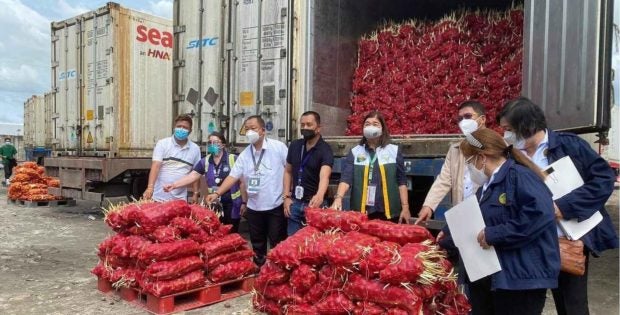 These smuggled onions were seized from overstaying container vans inside the Subic Bay Freeport. (Photo courtesy of Bureau of Customs)

SUBIC BAY FREEPORT––The Bureau of Customs (BOC)-Port of Subic destroyed some P362 million worth of smuggled vegetables and other agricultural products seized recently in this freeport, authorities said Monday, Oct. 25.

In a statement, the BOC said they found some of the goods in 60 40-foot container shipments deemed overstaying in the port.

The goods include onions, carrots, and broccoli declared as bread or frozen jams and yellow onions.

Collector Maritess Martinez of Port of Subic District said at least 18 of the container vans were transferred to Greenleaf 88 Hazardous Waste Disposal Center in Porac, Pampanga, for condemnation.

The other shipments remained under the custody of BOC-Port of Subic.