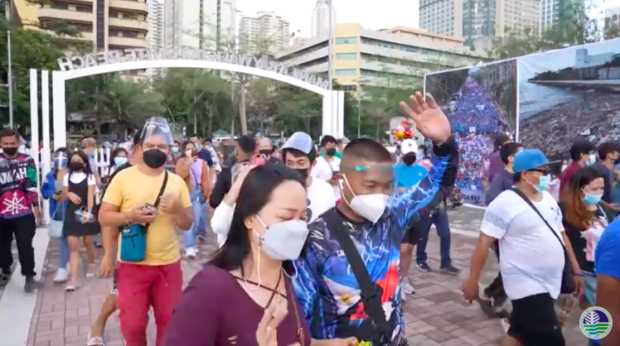 Thousands of people flocked to the Manila Bay Dolomite Beach after it reopened last week following the downgrading of the quarantine restrictions in NCR to Alert Level 3. Screengrab from YouTube / DENR

MANILA, Philippines — The Department of Environment and Natural Resources on Tuesday owned up to its failure to implement social distancing and other protocols when it opened the Manila Bay dolomite beach to thousands of visitors in recent weeks.

DENR Undersecretary Benny Antiporda however claimed that the overcrowding was quickly addressed by authorities, amid the government rule to limit the capacity to just 50 percent.

(Rest assured that what they said we had a violation of social distancing, it was immediately addressed because we implemented the five-minute rule.)

The five-minute rule, according to Antiporda, allows not more than 400 people in the over one-hectare dolomite beach for just five minutes, after which they would be ushered out to be able to accommodate the next batch.

(Sad to say, we have some media who captured a photo of people during the time when there was an influx. Again, we cannot say that we did not have any shortcomings. There was a slight shortcoming but it was addressed.)

Antiporda was also asked for his reaction to Manila City Mayor Isko Moreno’s challenge to government officials to file cases against environment officials for failing to control the volume of visitors in the artificial beach.

However, Antiporda was not aware of Moreno’s statement at the time of the briefing but shared that they received a letter from the mayor the day before.

“The document that we received last night is asking us on our plans and what are the strategies that we’re using in trying to control the crowd,” the DENR official said.

“So, very supportive pa ho ‘yung letter niya (his letter was even very supportive) and the letter started from the words na (of) ‘we are in full support of the project of the DENR.’ So, I don’t know kung saan po galing ‘yang statement na ‘yan (where that statement came from),” he added.

Starting Tuesday, the DENR has prohibited children aged 11 years old and below from entering the dolomite beach in accordance with the guidelines of the Inter-Agency Task Force on Emerging Infectious Diseases. The department is also mulling to close the area to visitors during weekends.

Read Next
DOST: No established data yet on benefit of VCO to hospitalized COVID patients
EDITORS' PICK
Smart offers wireless fiber-like speeds to Filipino homes with country’s first 5G Prepaid Home WiFi
Pharmally’s Twinkle Dargani in tears when asked about missing documents
Corruption in PH: Where presidential aspirants stand
Two more sites at Robinsons Malls for temporary offsite passport services
BIR audits tax compliance of Pharmally
Holidays made best with Acer’s ‘Holidays at Home’ raffle promo
MOST READ
Roque ‘hurt’ after presidential aspirant did not adopt him in Senate lineup
Gordon: ‘How dare you ask for Filipinos’ vote when you failed them?’
Pharmally’s Twinkle Dargani in tears when asked about missing documents
WHO chief scientist say Omicron is very transmissible
Don't miss out on the latest news and information.