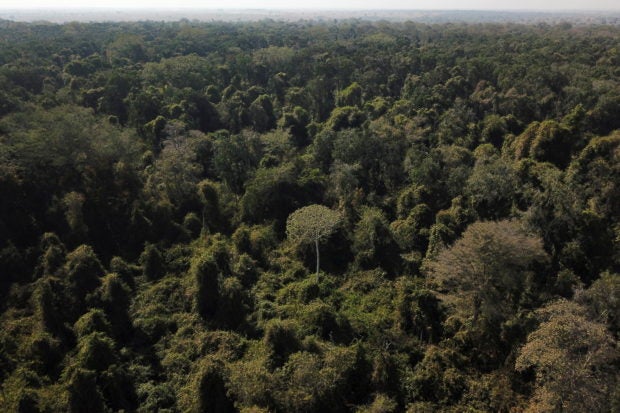 An aerial view shows a tree in the middle of degraded forest on the border between Amazonia and Cerrado in Nova Xavantina, Mato Grosso state, Brazil July 28, 2021. REUTERS FILE PHOTO

Mourao said forest fires in the Amazon region had dropped significantly, by about 40% this year, and that the Brazilian government will reaffirm its commitment to international environmental goals at the United Nations climate change conference in Glasgow that runs from Oct. 31 to Nov. 12.

The most recent satellite data on Amazon deforestation from national space agency INPE shows it rose slightly, by 2%, in September from a year ago.

Far-right President Jair Bolsonaro, who has been criticized by environmental activists and some world leaders for the rise in deforestation during his presidency, pledged in April during a White House Earth Day summit to end illegal logging by 2030.

The Amazon is the world’s largest tropical rainforest and is considered a major bulwark against climate change.

Bolsonaro is in favor of allowing commercial mining and agriculture on indigenous reservations, which have the most preserved forests in the Amazon.

Speaking at a news conference, Mourao said Brazil cannot rule out commercial mining in the Amazon. While he recognized building new highways through the rainforest brings environmental risks, he said they are essential for the Amazon region’s development.

He added that there should be negotiations to pay Brazil some form of compensation for preserving the Amazon rainforest.

Mourao disputed claims regarding illegal mining on indigenous lands, saying the number of illegal gold miners in the Amazon region is overestimated. He said the government calculates that number to be 4,000.

Mourao said the government has an obligation to crack down on illegal mining, pending a potential change in the law allowing mining in indigenous territories.

The Bolsonaro administration on Monday launched what it called a Green Growth program, an inter-agency plan to spur sustainable development in the Amazon and create jobs there.