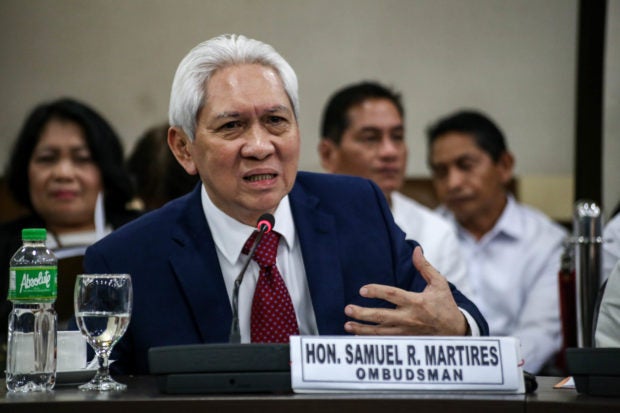 MANILA, Philippines — Ombudsman Samuel Martires remained adamant that he is not blocking transparency by placing restrictions on the release of public officials’ Statement of Assets, Liabilities, and Net Worth (SALN), as he believes that transparency does not mean showing one’s entire guts out.

Martires on Tuesday was asked whether the Office of the Ombudsman was forging a possible conflict of interest issue as the decision on the publication of SALNs — documents meant to provide the public a look into the wealth transactions of a government employee — rests on the person filing it.

In reply, he told CNN Philippines’ The Source that he is not restricting transparency, and that he is just observing jurisprudence based on Supreme Court (SC) issuances.

“I think on the issue of transparency, I don’t think that transparency means that pati loob ng bituka mo ilabas mo.  I am not restricting transparency, I am just following doctrinal rulings of the Supreme Court,” Martires explained.

According to Martires, the Supreme Court — considered to be the last bastion of democracy — even placed restrictions on SALN releases.

“In 2019, it expanded I guess its guidelines on how to access the SALNs of justices and judges.  So hindi ho kami ang nagrerestrict lang eh.  Even the judiciary, even the last bastion of democracy which is the Supreme Court is putting some restrictions because the Supreme Court said, this is subject to regulations,” he said.

Aside from these, the Ombudsman also referred to past SC resolutions that denied access to SALNs — noting that these in itself, are already regulations on access to SALNs.

“I made further research, I found that in 1989, the Supreme Court issued a resolution when somebody was trying to access the SALN of a judge, the Supreme Court said you first state the purpose of your request.  That is a regulation,” Martires noted.

“In 1992 […] the Supreme Court again issued a resolution prohibiting the Office of the Ombudsman, who was requesting for the SALN of a judge and the Supreme Court said no, ‘your request partakes the nature of a fishing expedition, and the request is not signed by the Ombudsman itself’.  So this is a policy regulation,” he added.

Earlier, Martires was asked in the same interview why he is being singled out for wanting regulations on who can obtain SALNs, and for what purpose, when government agencies acting as custodians of these documents are doing the same.

The Ombudsman has been advocating for the amendment of Republic Act No 6713 or the Code of Conduct and Ethical Standards for Public Officials and Employees, by stressing that SALNs can only be published for public information and not for commentary.

Under Martires’ proposal, making commentaries on the SALN of public official can be punishable by jail term of at least five years.

The possible amendments to R.A. No. 6713 were first raised by Martires during the House hearing of his office’s budget last September 9.

He said that even he been a victim of malicious reportage, as media outfits reported and allegedly made commentaries on his SALN — implying that he earned P15 million in three months without clarifying matters with him in the first place.

Read Next
Worker nabbed for manhandling partner, setting house on fire in Tarlac
EDITORS' PICK
UK’s Boris Johnson will resign, BBC reports
Unemployment rate up to 6% in May
Geek out at TOYCON 2022 powered by Smart Signature
High inflation: Your P1 is now worth only 87 centavos
High-risk pregnancy: Reducing your risk is in your hands
House energy committee chair Arroyo bats for cheap electricity
MOST READ
Suspect in grisly killing of missing woman in Bulacan arrested
Kim Atienza’s daughter flaunts bikini body in response to critics of her ‘revealing photos’
Japanese artist who created ‘Yu-Gi-Oh!’ found dead in the sea
UK PM quits as Conservative leader
Don't miss out on the latest news and information.