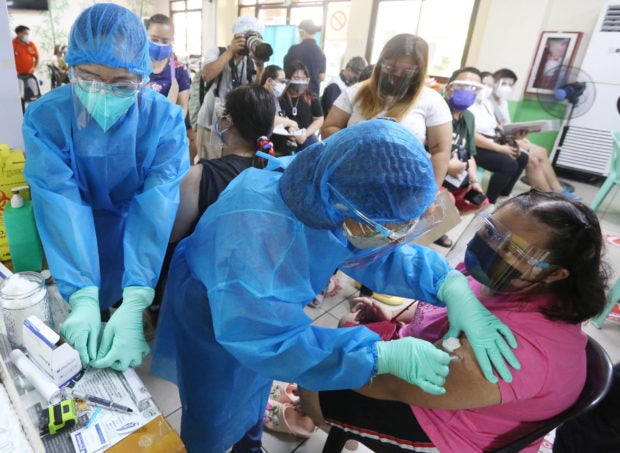 VAX IS KEY Minors accompanied by their parents get inoculated at the Ospital ng Maynila on Friday as vaccination for 12- to 17-year-olds continues, prioritizing adolescents with health conditions. —MARIANNE BERMUDEZ

The Philippines is back to low risk of a COVID-19 outbreak, two months and a half since the country returned to a lockdown due to a surge in cases driven by the Delta variant of the virus.

The Department of Health (DOH) broke the news on Monday, but immediately cautioned against complacency in observing health protocols, saying some hospitals were still full of COVID-19 patients.

It also called out government agencies and local authorities that allowed crowded mass gatherings such as those seen along Manila Bay’s artificial dolomite sand beach during the weekend.

“We are not saying we are out of the woods; we are not saying that we have totally decongested our hospitals,” Health Undersecretary Maria Rosario Vergeire stressed in an online press briefing on Monday.

“What we are saying as a matter of fact and based on the data we have now is that the number of hospital admissions [has] gone down. But we are not saying that we have no more problems,” she added.

She said at the national level, the country was classified at low risk due to the 48-percent decline in new cases in the past two weeks compared to the previous two weeks, and less hospital congestion.

With around 5,000 average daily cases reported last week, new COVID-19 infections have been on a decline at the national level and in most regions.

However, according to the DOH analysis, Metro Manila and five regions were still at moderate risk due to a high average daily attack rate (Adar)—or the percentage of infected persons in a population—and nearly full beds in the intensive care unit (ICU).

The Adar nationwide has gone down to the moderate risk of 5 per 100,000 population.

Usage of COVID-19 hospital beds has likewise declined to the safe level of 41 percent, ICU beds utilization to 53 percent and mechanical ventilators in use to 37 percent.

Metro Manila returned to the strict enhanced community quarantine on Aug. 5 as hospitals started getting overwhelmed.

Daily new cases then reached a record average of 20,946 during the second week of September. Last week, the average daily cases went down to 5,251 cases, around the same level seen in the last week of July before cases surged.

The country saw an average 68 COVID-19 deaths daily in October, down from a record average daily deaths of 167 in August and 159 in September.

In all cities in Metro Manila except Muntinlupa, the utilization of COVID-19 hospital beds has gone below the critical level of 70 percent.

With 149 more deaths, including 118 who were previously tagged as recovered, total deaths now stood at 41,793.

The DOH said 9 percent tested positive for the virus out of 47,731 people tested last Saturday. However, five laboratories did not report their results.

Unlike in other countries where Delta variant cases quickly overran the population, “we didn’t reach the projected number of cases, our health systems did not get overwhelmed although they are under strain,” Vergeire pointed out.

Vergeire criticized local authorities for failing to regulate the crowds at the Manila Baywalk dolomite beach.

“We call on all national agencies, local governments. Whatever safety protocols were discussed in the IATF (Inter-Agency Task Force for the Management of Emerging Infectious Diseases) they are for the good of the population and public health, therefore we need to implement them,” she said.

It was unacceptable, she said, for authorities to simply give the excuse that they could not control the crowd.

“If you can’t handle it because there are too many people, then you can change the regulations, the process. You need to help us prevent a new spike in cases,” Vergeire said.

“We are reminding those who are running for office to take it upon themselves to be responsible so that there will be no crowding or gathering when we have these kinds of activities,” Vergeire said.

Supporters of Vice President Leni Robredo organized simultaneous events in about 25 provinces and cities on Saturday morning to support her presidential run.

On Sunday, it was the turn of Manila Mayor Francisco “Isko Moreno” Domagoso’s supporters to hold the “Blue Wave Caravan” around Metro Manila that drew about 1,000 motorcycles and some 100 cars. INQ