As booster shots loom, mix and match of vaccines get closer look 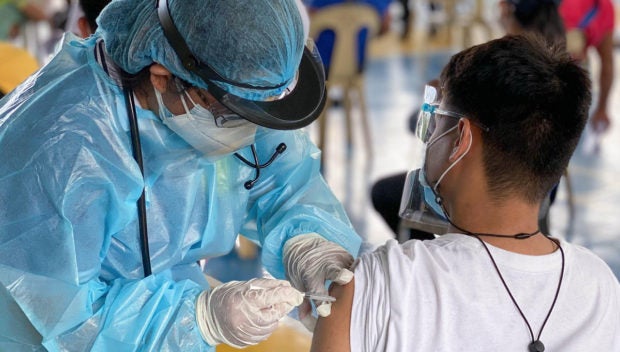 MANILA, Philippines—As several countries across the globe — including the Philippines — prepare for what could be considered as a third dose of coronavirus vaccines, or booster shots, more are starting to weigh in on mixing vaccine brands.

Last week, the United States (US) and the Philippines unveiled plans to mix and match vaccines for the third dose.

Here’s what you need to know about these recent vaccination updates.

Mix and match in US

Last week, aside from an expanded booster vaccination campaign — which authorized booster doses of vaccines from Moderna and Johnson & Johnson — both the US  Food and Drug Administration (FDA) and the US Centers for Disease Control and Prevention (CDC) have signed off on vaccine mixing for booster doses.

This authorizes the “mix and match” strategy for those who are eligible for a booster shot.

Meaning, eligible recipients in the US can now choose from vaccines by Pfizer, Moderna, or Johnson & Johnson for their booster shots. Their chosen vaccine brand may not necessarily match the brand used during their initial inoculation or for their first two doses.

“Eligible individuals may choose which vaccine they receive as a booster dose. Some people may have a preference for the vaccine type that they originally received, and others may prefer to get a different booster,” the CDC said in a statement.

“CDC’s recommendations now allow for this type of mix and match dosing for booster shots,” it added.

Earlier this year, the CDC issued an updated guideline allowing the mix of Pfizer-BioNTech with Moderna vaccines only in “exceptional situations” since both brands use messenger RNA (mRNA), which is supposed to generate protein production by cells to trigger immune response.

This was before booster shots were authorized.

In the Philippines, vaccine mixing is not yet authorized for eligible individuals. 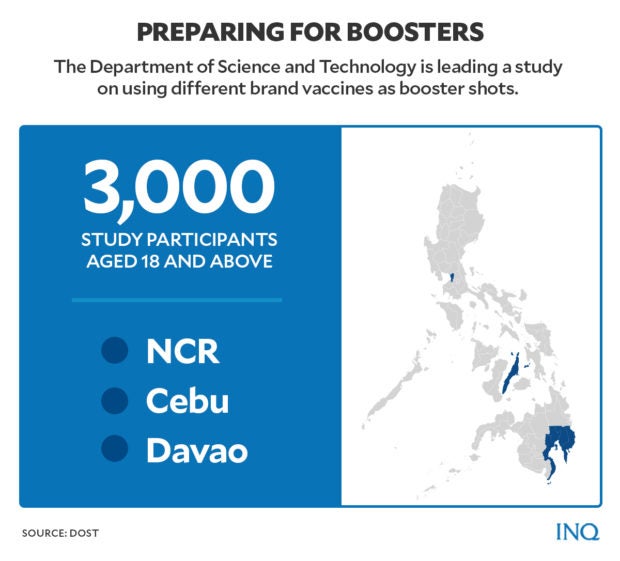 However, Science Secretary Fortunato de la Peña said the study on the mixing of vaccines was “ready to start” and the department was only waiting for approval by the Philippine FDA.

The multi-site study, according to De la Peña, will be conducted in eight venues—National Capital Region (NCR), Cebu and Davao.

It was expected to have at least 3,000 participants aged 18 years old and above.

The participants will be divided into three test groups, with a total of 12 study arms.

The study will be led by  Dr. Michelle de Vera of the Philippine Society for Allergy, Asthma, and Immunology (PSAAI).

The “unblinded trial” on vaccine mix and match “will determine the safety and immunogenicity of completing the vaccination series with available COVID-19 vaccines in the Philippines to those given Sinovac as the first dose,” said the science secretary.

De la Peña said a total of 400 Sinovac doses have so far been delivered to the Marikina City site for the study. 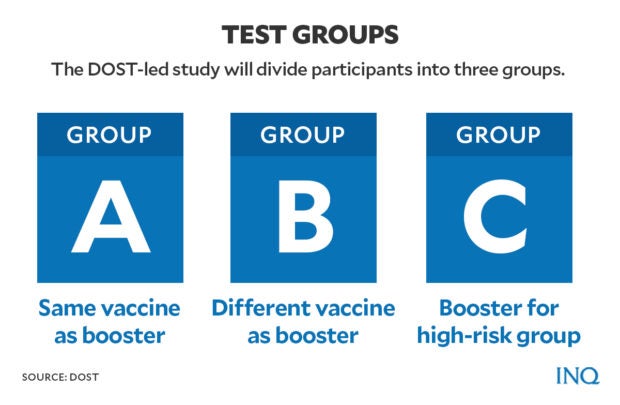 A dry run for the mix-and-match clinical trials was also held in Marikina last Oct. 18.

The vaccine mixing study by the DOST has been initially planned for June.

The expected start for the project was then pushed back to July but the study was not able to secure a clearance from the FDA.

In July, the Department of Health said only one brand of vaccine should be made available per vaccination center to prevent vaccine mix-ups.

“Per vaccination site, there should only be one type of vaccine there. We cannot have two types of vaccines in a vaccination site because that will lead us to these kinds of errors,” said DOH spokesperson Ma. Rosario Vergeire.

Several studies have already been conducted outside the Philippines, which tested the efficacy of mix and match regimens in preventing SARS-CoV-2, the virus that causes COVID-19.

The studies were conducted earlier this year when several countries have partially or completely halted the use of the vaccine developed by the pharmaceutical company AstraZeneca due to cases of blood clot events and deaths in Europe.

Those who have received one dose of the AstraZeneca vaccine in countries that suspended the shots have received a second dose of vaccine developed by a different pharmaceutical company.

A study, called the Com-Cov vaccine trial, led by the Oxford Vaccine Group in the UK, tests the use of different vaccine combinations for the first and second doses. 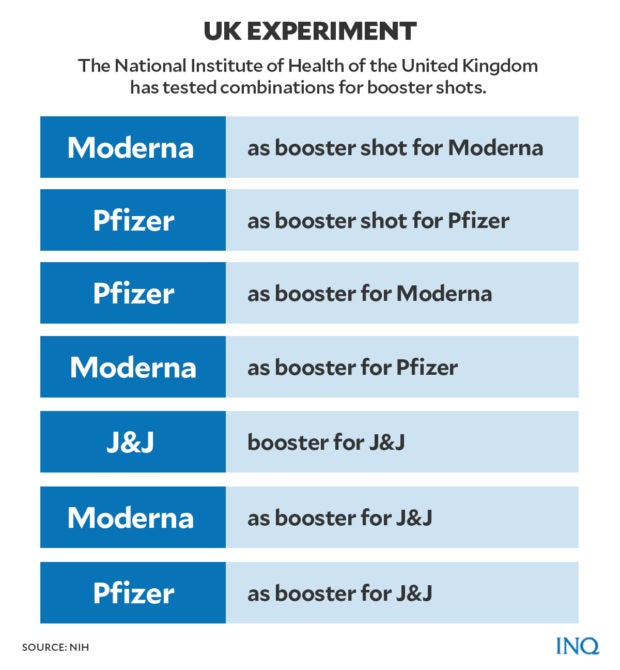 Initial findings released last May 12 in The Lancet, a highly-respected medical journal, showed that individuals, who got Pfizer shots followed by shots made by AstraZeneca, or vice versa, were more likely to experience mild to moderate symptoms of COVID-19.

The study found that the 830 participants — who were given either a double dose of the AstraZeneca vaccine or the Pfizer-BioNTech vaccine four weeks apart or a mix of both — have achieved a robust immune response against COVID.

A study conducted by epidemiologist Peter Nordström and his co-authors from the Umeå University in Sweden found that a dose of AstraZeneca vaccine followed by a dose of mRNA vaccine—either by Pfizer-BioNTech or Moderna—could provide better immunity against COVID, including against the highly-transmissive Delta variant.

The National Institute of Health (NIH) in the UK has conducted its own mix-and-match vaccine study. The preliminary results, which is not yet peer-reviewed, were released online last week and are now under review by the US FDA’s Vaccines and Related Biological Products Advisory Committee.

Here are some of the key details about the study:

The NIH study noted that the highest increase in antibody levels was found in individuals who have received Moderna as a booster shot after getting two full doses of the same vaccine brand.

Those who initially received the Pfizer vaccine and were given Moderna as a booster shot saw a 32-fold rise in their antibody levels.

The study also found that a second dose of Johnson & Johnson as a booster shot for the same vaccine brand only produces a fourfold increase in antibody levels.

For individuals who initially had Johnson & Johnson, the study results suggested Moderna as a booster shot after a 76-fold increase in antibody levels.

Johnson & Johnson-Pfizer combination, on the other hand, had a 35-fold increase in antibody levels.

The study found no safety concerns with the mixing and matching of certain vaccine brands. However, researchers noted limitations, including the study’s size.