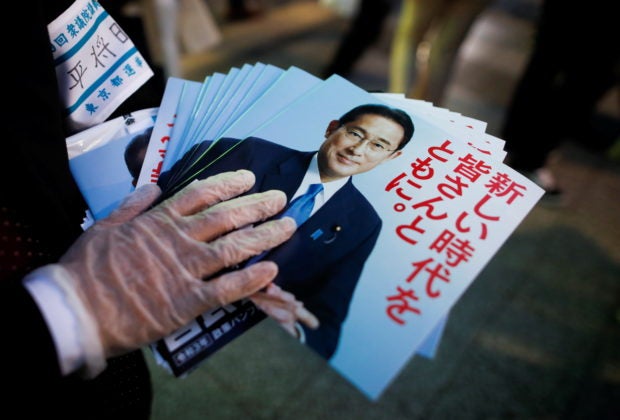 An election campaign staff member holds leaflets of Japan’s ruling Liberal Democratic Party with cover photos of Japan’s Prime Minister and the party’s president Fumio Kishida, as he distributes these to voters during an election campaign on the first day of campaigning for the upcoming lower house election, amid the coronavirus disease (COVID-19) pandemic, in Tokyo, Japan October 19, 2021. REUTERS/Issei Kato

The loss of an upper house seat in Shizuoka prefecture, to an independent candidate supported by the opposition, comes as Kishida’s popularity has taken a hit in opinion polls, raising the prospect his time in office could be short-lived.

He has called for a “new capitalism” that would spread the benefits of growth and pushed to roll back some of the “Abenomics” policies of his former boss, Shinzo Abe. Yet he has so far failed to capture the imagination of voters since taking over from Yoshihide Suga this month.

“The result in Shizuoka is disappointing,” Kishida told reporters on Monday morning, just hours after the results. He said that he planned to “solemnly accept” the decision and analyze the reasons for the loss.

The LDP won the other by-election, in the conservative stronghold of Yamaguchi. The two special elections were the first national polls since Kishida took office and are seen as indicators for how the LDP will fare in Sunday’s poll for the powerful lower house.

In Shizuoka, west of Tokyo, independent candidate Shinnosuke Yamazaki won by a solid margin of around 50,000 votes over the LDP candidate.