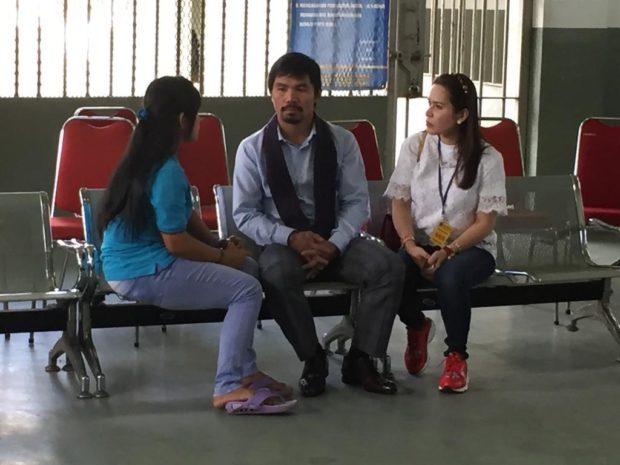 Presidential aspirant and Senator Manny Pacquiao on Monday said he was the primary author of three measures, one of which has been enacted into law, that were intended to promote and protect the welfare of Overseas Filipino Workers (OFWs) and has provided assistance to hundreds of distressed Filipino migrant workers.

Pacquiao made this statement to rebuff criticisms made by former party-list congressman and now vice-presidential candidate Walden Bello that he was remiss in his duties as the committee on OFW chair. Pacquiao stressed that presiding over hearings is not the true measurement of one’s commitment to serve the interest of Filipino migrant workers.

Apart from extending assistance to thousands of distressed OFWs in his time as a congressman and now as a senator, Pacquiao said that he was the primary author of Republic Act No. 11227 or the “Handbook for Overseas Filipinos Act.” Also nearing enactment are his proposal for the creation of the Department of Overseas Employment and the proposed OFW Remittance Protection law.

Pacquiao said that apart from pushing legislation for OFWs, he had also extended various forms of assistance for OFWs such as passport renewals, medical assistance, legal assistance, scholarships, and even direct financial aid.

Pacquiao cited the case of Filipina death row convict Mary Jane Veloso where he even went to Indonesia to personally appeal for clemency. Although Veloso is still in jail, the Indonesian government has given her a last-minute reprieve from execution.

Also unknown to the public, Pacquiao said, is the assistance he gave to the family of Iloilo native Joanna Demafelis who was murdered and later found in a freezer in Kuwait.

Just recently, Pacquiao said he also facilitated the repatriation and pardon of four OFWs in East Timor. He also provided direct financial assistance to the families Geraldine Desalla, an OFW in Saudi Arabia, and Eden Bianzon, an OFW in Qatar who both died while in quarantine six months ago.

Despite Bello’s tirades, Pacquiao said he still respects his former colleague in the House of Representatives and would happily work with him to uplift Filipinos from poverty and fight the worsening corruption in government.