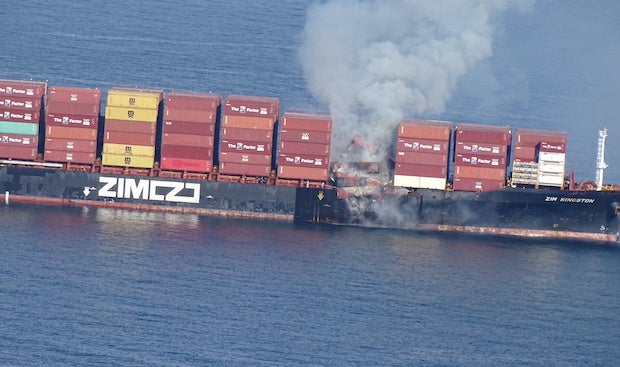 Smoke rises from the container ship Zim Kingston, burning from a fire on board, off the coast of Victoria, British Columbia, Canada Oct. 23, 2021. ( Canadian Coast Guard/Handout via REUTERS)

VICTORIA, British Colombia — A tug boat spent the night fighting a container fire that broke out on Saturday on a cargo ship carrying mining chemicals off British Columbia, the Canadian Coast Guard said on Sunday, adding that it would continue to monitor the situation.

Sixteen crew members were evacuated from the MV Zim Kingston on Saturday, while five remained onboard to fight the fire.

“Overnight the tug Seaspan Raven has cooled the hull of the M/V #ZimKingston by spraying the hull with cold water,” the coast guard said on Twitter. “Due to the nature of chemicals onboard the container ship, applying water directly to the fire is not an option.”

The coast guard warned that there was an emergency zone around the ship, telling all vessels to stay at least two nautical miles away, and the Transport Ministry restricted all aircraft, including drones, from flying within two nautical miles or below 2,000 feet over the ship.

Earlier on Sunday Danaos Shipping Co, the company that manages the container ship, said in a statement that no injuries had been reported.

The fire “appears to have been contained,” and a salvage and fire extinguishing agency was brought in to ensure the safe return of the vessel’s crew, Danaos said.

The mishap comes as more bad weather is expected to hit the area on Sunday and amid a global shipping traffic jam that has held up deliveries all over the world.

On Saturday, Canada’s coast guard said the ship itself was not on fire and only 10 containers were burning.

Canada’s coast guard said it has been working with its U.S. counterpart to track 40 containers that had previously fallen overboard when Zim Kingston encountered bad weather, saying they posed a significant risk to mariners.

The company did not immediately respond when asked if the lost containers were linked to the fire.

“Mariners are advised to stay clear of the area. Currently, there is no safety risk to people onshore. However, the situation will continue to be monitored,” the coast guard said on Saturday when video obtained by Reuters showed fire cascading down from the deck of the ship into the water.

“This is extremely concerning. The ship and containers are very close to Victoria, BC, and a big storm is forecast to hit tonight. We … are worried this may be yet another environmental disaster,” said David Boudinot, president of Surfrider Foundation Canada, an environmental organization.