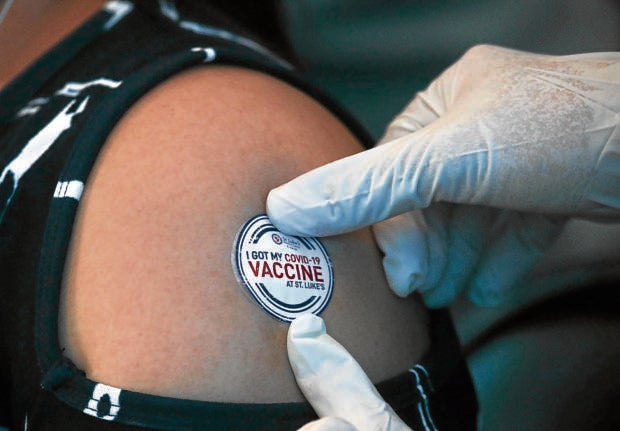 MANILA, Philippines — The government must provide medical front-liners with the “best” vaccine brand once it starts the rollout of booster shots, an official of a health workers’ group said on Sunday.

Jao Clumia, president of the St. Luke’s Medical Center Employees Association, said they were vaccinated with either Sinovac and AstraZeneca and “based on the news and even our own evaluations, the antibodies of these vaccines tend to decrease over time.”

An antibody is a protein produced by the immune system that neutralizes harmful substances such as bacteria and viruses that enter the body.

A study by Chinese researchers published in July reported that the antibodies of Sinovac jabs declined below an important threshold six months after people received the vaccine’s second dose.

A third shot, however, could provide a strong booster impact, the laboratory study indicated.

“A third dose of CoronaVac administered six or more months after a second dose effectively recalled specific immune response to SARS-CoV-2, resulting in a remarkable increase in antibody levels,” the report noted.

Clumia said there were about 16,000 health-care workers from 12 institutes of St. Luke’s, all of them vaccinated, who would require the booster shot.

“So our request, since we are one of the largest hospitals, is for us to be given the best vaccines like Moderna or Johnson & Johnson,” Clumia told the Inquirer.

“The health workers really need the booster shots. In fact, we have been waiting for that for two months now but the Department of Health (DOH) said that they are still waiting for approval,” he said.

In an Oct. 13 letter to Health Secretary Francisco Duque III, the Health Technology Assessment Council (HTAC) recommended putting the health workers first in line to receive the booster shots. It suggested that this be done in the last three months of the year.

Duque reportedly approved and signed the recommendation on Oct. 21.

Aside from the booster shots, Clumia also called on the government to “tell the truth” on what has happened to the budget for the COVID-19 hazard pay and allowances for meals, accommodations and transportation of health workers.

“We are losing hope. That has become a problem because the government is yet to provide our benefits, especially to the nurses where we are seeing continuous resignations,” he said.

A group of private healthcare workers on Saturday denounced the continued delay in the release of benefits promised by the government, although the DOH has blamed hospitals for not complying with requirements.

In a press briefing, the Private Hospital Workers Alliance of the Philippines (PHWAP) demanded the distribution of allowances that President Duterte had already ordered to be released since August.

The PHWAP represents 63,772 health workers in 12 private hospitals in Metro Manila and Laguna.

The amount excluded special risk allowances (SRAs) and other benefits such as life insurance for those who contracted COVID-19 while on duty.

Siazon said that many workers have received their SRAs, whether partially or in full, but have yet to get the allowances provided under the Bayanihan 2 law, which already lapsed on June 30.

SRAs are estimated to be about P30,000 for a six-month period, provided the healthcare worker had complete work attendance, he said.

PHWAP also disputed claims by the DOH that there were lapses in their applications for benefits.

Health Undersecretary Maria Rosario Vergeire earlier said the funds for meals, transportation, and accommodations were already available, but that there were lapses in the workers’ claims.

However, Siazon said their hospitals have not informed them of any concerns about their accomplished applications.

The DOH reported 208 more deaths due to COVID-19, including 154 people who were previously tagged as recovered. This brought the total deaths to 41,793 since last year.

Out of all detected cases, 60,957 individuals were still battling the coronavirus disease, down from 63,051 last Saturday.

Most or 77.5 percent were mildly ill, 6.1 percent asymptomatic while the rest were admitted in hospitals.

According to the DOH, hospital occupancy rates remain at safe levels.

The positivity rate—or the number of people who tested positive for the virus—was 10.3 percent out of the 52,881 people tested last Friday.

Two laboratories did not report their results.

Nationwide, 53 percent of beds in the intensive care unit (ICU) for COVID-19 patients were occupied while 41 percent of isolation beds and 38 percent of ward beds were in use.

In Metro Manila, 46 percent of COVID-19 ICU beds are occupied; 35 percent of isolation beds, and 34 percent of ward beds.