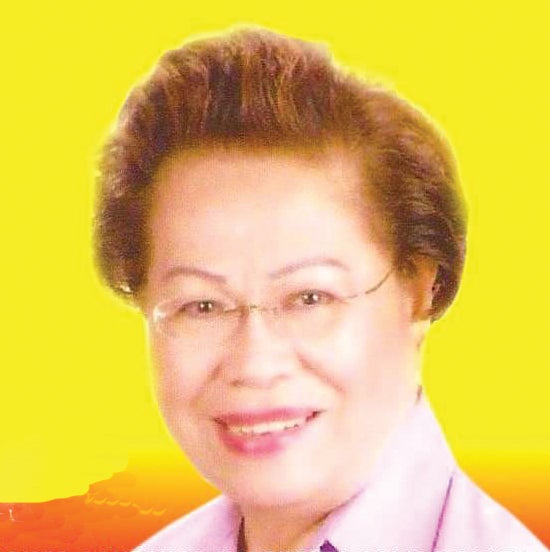 She died peacefully in her sleep after battling a sickness due to old age, according to the relative who preferred not to be named.

The wife of politician and long-time Marcos ally Democrito Plaza, Valentina served as the provincial governor here from 1969 until after the Edsa people power revolt in 1986. She first attempted a comeback to her old post by running in an election in 1988 but lost to Ceferino Paredes, Jr. by a slim margin.

A decade later, she made another attempt against Paredes and won, allowing her to serve as governor from 1998 to 2001.

Her late husband Democrito O. Plaza (DO Plaza) also served as a former governor and a longtime congressman in the province but at the time when Valentina served as governor of the province, he was busy building up his business empire that included the Apo Cement Corporation in Cebu, which later earned him the reputation as one of the country’s richest billionaires of his time.

Valentina, however, was known as the province’s first governor to have formally built the provincial capitol in Barangay Patin-ay here before it was moved to the DO Plaza Government Center, a much bigger area within the two annex buildings that sat on a 200-hectare land donated by DO Plaza to the provincial government.

It was also during her last stint in office that the three-story Capitol building was built at the center of the two annex buildings. The Capitol building has wings on both sides for legislative and judiciary offices.

Governor Plaza used to serve as the regional chair of the Regional Development Council (RDC) and chair of the Caraga Development Board (CDB). She was known as a devout Catholic and had added to the five-point development agenda pursued by her late husband, the sixth agenda; which was the moral and spiritual renewal program. She established the Moral Recovery and Values Formation Office as another department of the provincial government.

In June 2001, at the end of her first comeback term, she opted to retire from public service.

After a long hard day’s work, she said, “It is time to smell the flowers.”