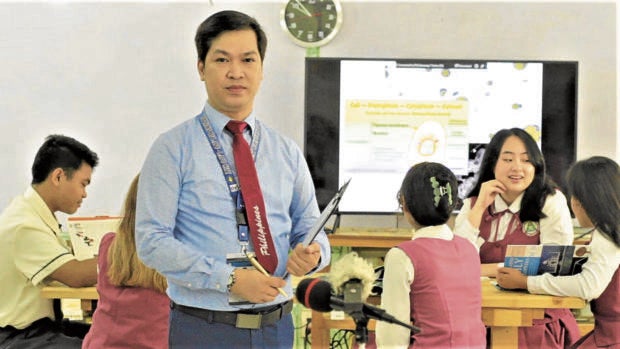 MANILA, Philippines — A 43-year-old educator from Cebu province is among the finalists in this year’s Global Teacher Prize (GTP), considered the Nobel Prize of the teaching profession.

Bryant Acar, of the Science and Technology Education Center-Senior High School (STEC-SHS) in Basak, Lapu-Lapu City, is one of the Top 10 nominees for the award, which also comes with a $1-million cash prize. The winner will be announced next month.

Since 2018, Acar has already been recognized twice by other international bodies for his work, but “being in the [GTP] Top 10 is something I did not expect. There are so many teachers with high qualifications and great accomplishments, so many of us are clueless as to who will make it to the list,” the science teacher said.

In a statement on Friday, Education Secretary Leonor Briones congratulated Acar for his accomplishments.

“The passion of Mr. Acar is another inspiring story we want to cultivate in the Department [of Education]. We will always be rooting for the likes of Teacher Bryant, as we are dedicated to further developing their skills and talents in the teaching profession,” Briones said.

Prior to handling senior high school students, Acar taught in two universities for 14 years, with a comparatively lighter workload.

“But my calling for a greater purpose has made me realize that I have to give back to students who are the least, the lost, and the last. These are the students who are poor, whose potentials can be developed with the right amount of inspiration,” he said in a video posted on the GTP Facebook page, which announced his selection as a finalist on Oct. 14.

Before campuses were shut down because of the pandemic, Acar needed to travel for 16 kilometers on a tricycle from his Cebu City home to his Lapu-Lapu City campus, where he must arrive by 6 a.m.

Acar joined STEC-SHS in 2016, the year the senior high school program was introduced. With the school yet to fully adjust to the new system, he needed to make do with the available space and resources, conducting his class in a storage room, in the canteen, and even in the dressing room behind the schoolyard stage.

It also didn’t help that the campus was built next to Mactan-Cebu International Airport, where the arrival and departure of planes would drown out his lectures or distract student activities.

But instead of letting the situation rob him of energy and send him packing, it even caused an inner spark: He came up with his own teaching modules and received approval to share them with 10 neighboring schools.

Five years later, those modules have been adopted by 86 teachers and used by more than 21,000 students.

It was not the only challenge that saw Acar going beyond what was expected of him.

So that the school can finally buy two electron microscopes, Acar raised funds by setting aside a portion of his salary for five months. He also asked his friends to donate books, a projector, and a laptop to the school.

“Nothing can stop a resourceful teacher,” he said, explaining why he went the extra mile. “There are so many ways we can improve the world and we can start it in the classroom.”

Now on its seventh year, the annual GTP is presented by the London-based Varkey Foundation, in partnership with the United Nations Educational, Scientific and Cultural Organization, to recognize “an exceptional teacher who has made an outstanding contribution to their profession.”

This year’s awarding rites will be held virtually on Nov. 10.

Aside from Acar, who advanced to the Top 10, another Filipino teacher — Michelle Rubio of Calao Elementary School in Sorsogon City — reached the Top 50.

The GTP 2021 edition received more than 8,000 nominations or applications from 121 countries.

In 2018, Jesus Insilada of Alcarde Gustilo Memorial National High School in Calinog town, Iloilo province, was also among the Top 10. Other finalists from the Philippines were Windel Alvarez (Top 50 in 2020) a mobile teacher for the alternative learning school system in Caramoan, Camarines Sur; and Venus Alboruto of Surigao City National High School (Top 50 in 2019).

Should he win the award, Acar said he would use the prize money to build a new and technologically upgraded learning hub for STEC-SHS students, as well as a school bus. He also wished to tour other schools abroad to pick up best practices that he can share locally.

As a science teacher, Acar believes that “learning by doing” and “hands-on experiences” deliver the best results, as they allow students to absorb lessons with context and adapt them to local needs.

He instructs his students, for example, to find solutions to real-life problems affecting their community, by making them interview locals or conduct surveys.

So far, they have come up with projects with potential applications in fire prevention, flood mitigation and biodegradable packaging. Many of them have won in national and international science competitions.

“I am a product of great teachers who guided me to develop my full potential and inspired me to achieve great things in life,” Acar said. “Deep in my heart, I’d like to be a teacher for the rest of my life. I’d like to be a changemaker.”

In February 2020, Acar was named Outstanding Educator in the International Education Summit and Awards held in Bangkok, Thailand. Two years earlier, in Bali, Indonesia, he placed second among the best science teachers in the region, as evaluated by the Southeast Asian Ministers of Education Organization.