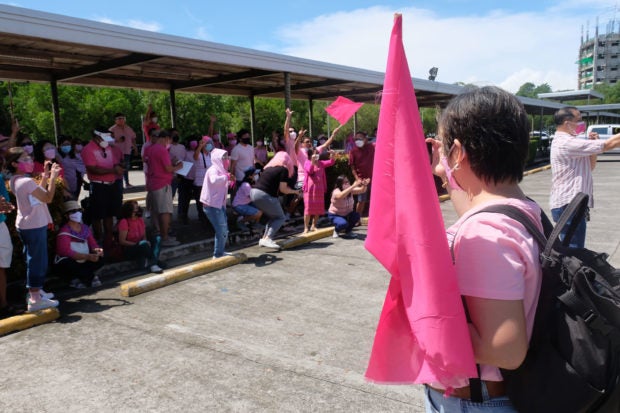 Supporters of Vice President Leni Robredo held a short solidarity activity at a parking lot of a mall in Davao City on Saturday, after a caravan around the streets. Bong S. Sarmiento

DAVAO CITY—A flash crowd of Vice President Leni Robredo’s supporters paraded Saturday in a “car mob” or caravan mobilization bearing her pink signature color in the streets of this city, the hometown of President Rodrigo Duterte.

About 50 cars and motorcycles here joined the simultaneous nationwide caravan supporting the bid of Robredo for president and her running mate Senator Kiko Pangilinan in the 2022 national elections.

“Not all people in Davao City are DDS supporters,” lawyer Romeo Cabarde, Jr. said, referring to the Diehard Duterte Supporters.

Robredo’s supporters, after going around briefly at the downtown proper in a small caravan, converged at a parking lot of a mall here for a short solidarity activity with those from other parts of the country.

Pablo Reyes, one of the organizers of “Mindanaoans for Leni” in this city, noted that those who joined the “car mob”, which includes doctors, lawyers, businessmen, the youth and labor leaders, wanted to express their support to the Robredo-Pangilinan tandem ahead of the campaign season.

“This is not yet campaigning. We just wanted to show our solidarity to VP Leni,” he said.

Reyes said the conduct of the “car mob” was agreed upon just two days ago “during a spontaneous discussion” among the circle of Robredo’s supporters in the city.

Robredo and Pangilinan’s supporters were clad mostly in pink, their vehicles tied with pink balloons and tarpaulins that read “Davao Para Kay Leni” and “Honesty, Integrity, Rule of Law, Leni Robredo Para sa 2022,” among others.

Robredo is gunning for the country’s top post as an independent candidate although she remains the chairperson of the opposition Liberal Party, where Pangilinan is the party president.

Reyes said Robredo’s supporters in Davao City hope to fully organize themselves before the campaign season, which will start from February 8 to May 7, 2022, for president, vice president, senator, and party-list groups.