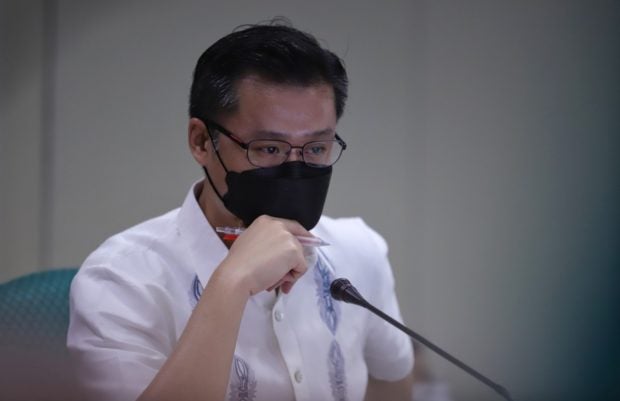 MANILA, Philippines — Senator Sherwin Gatchalian is barring National Transmission Corporation (TransCo) president Melvin Matibag from attending future budget hearings of the Department of Energy (DOE) in the Senate until he is “able to behave in a professional manner.”

In a letter sent to Energy Secretary Alfonso Cusi on Friday, Gatchalian, who chairs the Senate finance subcommittee tackling the DOE budget, recalled the Oct. 21 hearing where Matibag was “declared out of order” and removed from the proceedings after calling it “political.”

Matibag made the remark after Senator Manny Pacquiao raised allegations against the DOE. Pacquiao and Matibag, a close ally of Cusi, are part of feuding factions within PDP-Laban.

“Any abusive, offensive, or otherwise improper speech or behavior will not be tolerated. As such, until Atty. Matibag is able to behave in a professional manner, I am constrained to prohibit his attendance to the remaining hearings of the Committee on Finance (Subcommittee E),” Gatchalian’s letter read.

The senator then issued a reminder to all representatives of the DOE, including TransCo, “to conduct themselves with courtesy towards all attendees of Senate hearings and inquiries including the Chairperson, other Senators present, and all other guests and resource persons and to give due respect to the Senate as an institution.”

In a separate letter, Matibag apologized for his behavior but accused Pacquiao of abusing his legislative privilege.

“The issues being raised by Senator Pacquiao against me are the same materials used in the demolition job against me at the House of Representatives in 2019…,” Matibag said, adding his actions were a “righteous indignation.”

Still, he said he did not intend to disrespect Gatchalian, the finance subcommittee or the Senate.