Phase 2 of vaccination of minors begins in Metro hospitals 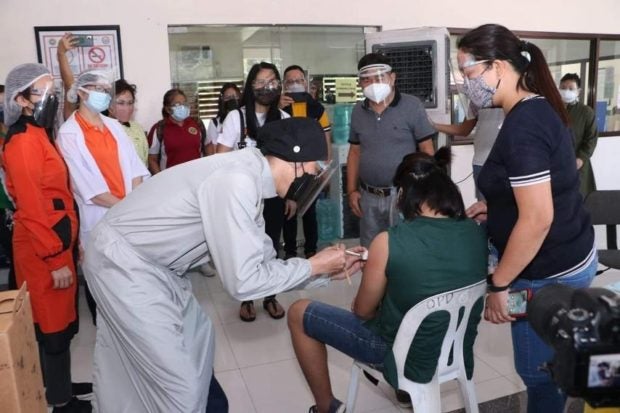 A minor gets vaccinated in Caloocan City on Oct. 22, 2022, the first day of the second phase of vaccination of children with comorbidities. Image courtesy of Caloocan City Public Information Office

MANILA, Philippines — The Phase 2 of vaccination of minors with comorbidities against COVID-19 began in several Metro Manila hospitals and vaccination sites on Friday, the Department of Health (DOH) announced.

“Getting vaccinated against the virus, not only the adults, but also eligible children based on the Department of Health policies and guidelines will make a better environment for the kids,” said Health Undersecretary Roger Tong-an during the ceremonial vaccination at Cardinal Santos Medical Center.

Aside from the said three hospitals, the second phase of immunization also commenced in 16 hospitals and areas near hospitals:

Meanwhile, the following eight hospitals where the pilot phase was conducted are continuing the vaccination of minors:

The Phase 1 vaccination on minors began on Saturday.

Tong-An reiterated that the initial phase of vaccination of minors was conducted in hospitals since they have the capacity to manage possible serious adverse reactions to vaccines and facilitate easy referral of minors with underlying conditions, some of which are confined in the said hospitals.

“As with the vaccination process of the adults, the vaccination for children will be closely monitored to detect adverse events following immunization to ensure the safety of our young vaccine recipients,” Tong-An said.

The DOH is yet to release a total number of minors who received vaccines as the vaccinations were still ongoing.