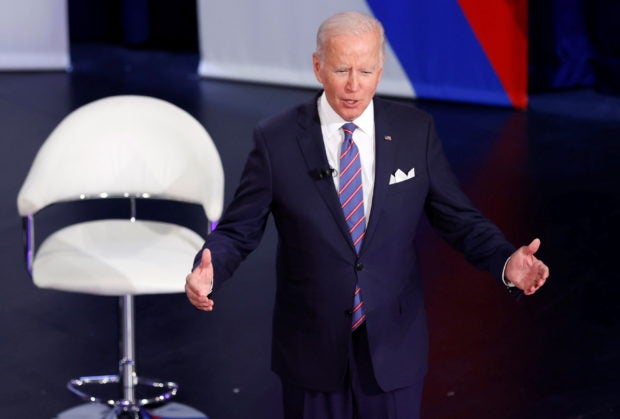 BALTIMORE – President Joe Biden said on Thursday he was close to striking a deal to pass major infrastructure and social spending measures, with just a handful of issues still under debate, after weeks of intraparty bickering among his fellow Democrats.

Biden struck a confident note on his $1 trillion bipartisan infrastructure deal and a separate, social spending plan expected to cost under $2 trillion during a CNN town hall event in Baltimore. The legislation is at the heart of his domestic agenda.

When asked on CNN whether Democrats were close to a deal, Biden said: “I think so.” Later, he added “If we can’t eventually unite this country, we’re in deep trouble. … I do think I’ll get a deal,” he said.

White House spokeswoman Karine Jean-Pierre told reporters that Biden would insist the legislation be paid for and not add to the deficit, which will be difficult to do without the tax increases he pushed as part of his presidential campaign last year.

On Thursday Biden said corporate tax rates are unlikely to be hiked in a spending bill. Instead, he said a separate minimum corporate tax proposal could fund the social programs.

The social spending plan remains a subject of pitched debate on Capitol Hill and in the White House as negotiators look for the sweet spot between progressives wanting an array of new programs and moderates worried about the cost.

As Biden seeks a final agreement in coming days, questions have emerged about whether some of his most oft-cited promises, like raising taxes on corporations and wealthy Americans might have to be dropped to ensure passage of the spending bill.

Negotiations now center around four or five issues, Biden said, declining to give further details. He later said a clean energy performance plan has not been dropped by the bill, adding that Senator Kyrsten Sinema is “very supportive” of his environmental agenda.

Sinema and Senator Joe Manchin, both moderate Democrats, have been pushing for a smaller package and have opposed some elements of the bill.

On climate, Biden said he could use tax incentives instead of an electric grid proposal to reach climate goals. Manchin, Biden added, is open to such tax incentives.

Biden said “it would be a reach” for his spending bill to include provisions that help with hearing aids, dental and vision benefits together.

As Biden’s motorcade arrived in Baltimore on Thursday night, several dozen demonstrators stood outside the venue chanting slogans in favor of liberal causes, including ending fossil fuel use and cementing a path to citizenship for immigrants.

The town hall format is one that Biden appears to favor. He takes questions from reporters occasionally in brief encounters but has had few full-blown press conferences since taking office in January.