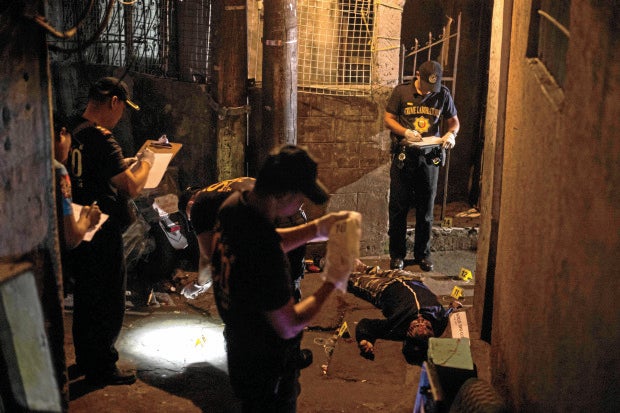 DRUG KILLING Policemen investigating the killing of an alleged drug dealer who was gunned
down in Manila. AFP File photo

MANILA, Philippines — The Department of Justice (DOJ) will continue to look into more killings under President Rodrigo Duterte’s war on drugs and will focus on those that took place in urban areas.

Justice Undersecretary Adrian Sugay made the announcement at Malacañang’s press briefing on Thursday, a day after the DOJ released a summary of its review of 52 cases that resulted in the killing of drug suspects and that involved more than 150 policemen.

The DOJ summary showed that the cops involved in the killings got off with light penalties, such as suspension, and rights advocates noted a pattern of police abuse and impunity in the anti-drug operations.

Also on Thursday, the Commission on Human Rights (CHR) welcomed the release of the DOJ findings but said it hoped to be given access to the 52 cases reviewed, suggesting that it remained excluded from the process.

CHR spokesperson Jacqueline de Guia said the commission remained “open, willing and ready to assist” the government’s review of the drug war cases, of which it was supposed to be part along with the DOJ and the Philippine National Police.

The 52 cases make up a small fraction of the thousands of deaths that, police claim, resulted from drug suspects fighting back and resisting arrest.

Sugay said there were some 6,000 more cases of drug war killings that needed to be investigated.

“That’s too many, and we have a few months to do it, so what we and [Justice Secretary Menardo Guevarra] agreed on … is that maybe we should concentrate on certain urban areas,” Sugay said.

He said that Guevarra had given instructions to this effect, and that the PNP chief, Gen. Guillermo Eleazar, had expressed readiness to make the case records available to the DOJ.

“This is what we will do in the next few months. We will review more case files about those who died as a result of anti-illegal drug operations,” Sugay said.

He said the DOJ’s findings on the 52 cases it reviewed were just its initial assessment.

He also said the DOJ had endorsed the cases to the National Bureau of Investigation for determination on which ones should lead to prosecution.

‘We are not soft’

At the same press briefing, presidential spokesperson Harry Roque denied that the administration had been soft on law enforcers involved in anti-drug operations that resulted in killings.

“The decision of the DOJ proves that we are not soft because they will face cases. This is what is meant by Secretary Guevarra’s referral [of the cases] to the NBI for case-building. Of course, when cases will be filed, there should be strong evidence,” he said.

Roque said the DOJ findings also showed that the government was fulfilling its obligation to protect the right to life. “We are investigating, prosecuting, and punishing those who kill,” he said.

The President has regularly defended his war on drugs and threatened to kill those involved in the illegal trade. He has also promised to protect law enforcers in anti-drug operations that resulted in the killing of suspects.

Sugay said the DOJ would await permission from Malacañang to release the results of its first review of 300 drug war cases.

The report has been submitted to Malacañang and it is up to the President to decide if it would be made public, he said.

He added that the release of the DOJ summary on the 52 cases had Malacañang’s go signal.

But Roque said the report could not be released in full because it covered “live cases.”

“The reason the … report could not be released verbatim is these are now live cases subject to police investigation by the NBI and constitute exception to freedom of information, as they are live criminal investigations,” Roque said.

In an earlier, separate interview with the Inquirer, De Guia said the CHR had been in talks with the DOJ and the PNP on file-sharing since the review of 52 cases was first announced, to no avail.

Both the DOJ and the PNP had repeatedly dodged questions on whether they would share the case files with the state rights watchdog.

On Thursday, De Guia called on the government to also remember the thousands of alleged extrajudicial killings (EJKs) in the past five years.

“While we see movement, the CHR continues to urge the government to remain mindful of the remaining thousands of alleged EJK cases waiting for resolution and justice,” she said, adding:

“The CHR stresses that the first step toward making perpetrators accountable for their offenses is through genuine and straightforward investigation.”

De Guia also expressed hope that the results of the DOJ review would encourage more families to “come out and participate toward the resolution of cases.”