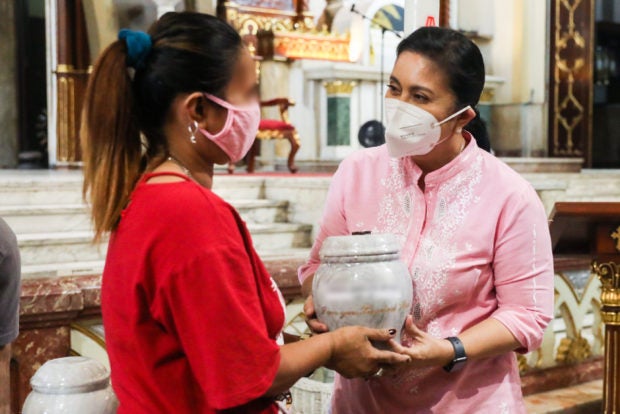 Vice President Leni Robredo attended the blessing and turnover of the cremated remains of several victims of extrajudicial killings (EJK). Image from OVP

MANILA, Philippines — Vice President Leni Robredo on Thursday vowed to extend assistance to the relatives of victims of extra-judicial killings in the Duterte administration’s brutal war on drugs.

During a short program on Thursday, separate urns containing the cremated remains of victims of summary execution were turned over by the Society of the Divine Word – JPIC Project Paghilom to relatives after the five-year lease on their graves has already passed.

The volunteer groups facilitated the cremation process and bought the urns.

Robredo was present during the program, telling the victims’ relatives that she and her office will be there if they need anything.

(I am here for you, my office is here for you.  If ever you need anything — even if you only need someone to talk to, our office’s doors are very much open for all of you.)

Robredo likewise expressed hope that the victims’ kin would not lose hope despite their loss, and continue to better their lives as an offering to the victims.

(We still have a lot to do.  I hope we do not lose the strength to fight, because a lot of things may still happen tomorrow.)

(We can no longer bring back the lives taken from us, but if we can better our lives, it would be a fitting offering for them: that even if they are no longer here, we can assure that the people that they left would be taken care of.)

Robredo has lent her voice to Duterte’s drug war, and had been very critical of human rights violations into supposed state-sponsored killings.

Her short-lived stint as co-chair of the Interagency Committee on Anti-Illegal Drugs (ICAD) had prompted her to submit three reports to President Duterte’s office on alleged irregularities in the standard operating procedures in the conduct of Oplan Tokhang. This, however had been widely viewed by Palace officials as a “wasted opportunity,” as they accused her of using the post “as a platform to attack the methods” undertaken by the administration.

Duterte’s drug war has gained local and international condemnation, and he several officials are now  facing a complaint for allegedly committing a crime against humanity before the International Criminal Court (ICC) for mass murder.