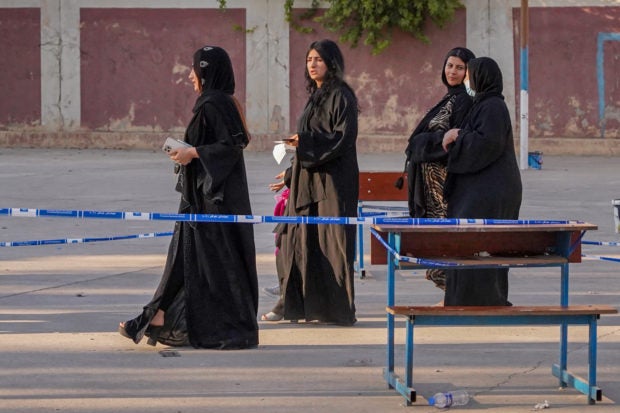 HALABJA, Iraq — In the Kurdish city of Halabja in northeastern Iraq, municipal director Kwestan Faraj recalls the day when being a woman saved her life.

Though equality may be a distant reality for many women in Iraq, in Halabja women have reached top levels of local government.

Mayor, university dean, director of the veterinary department, and health spokesperson are some of the senior posts held by women in the city of around 115,000 inhabitants.

It marks something of a departure for Iraqi Kurdistan, where public affairs have long been dominated by a handful of men.

Tradition and conservative values have meant that women face routine discrimination and are largely confined to the private sphere.

“When you are a woman, climbing the ranks comes with a lot of sacrifices,” Faraj, 55, told AFP.

A former deputy head of the municipality for 15 years, Faraj launched her political career many years earlier, when as a student she handed out leaflets against Saddam Hussein’s regime, which carried out an infamous chemical attack on the city shortly before the end of the Iran-Iraq war in 1988.

She recalled one day when an armed man arrived demanding that she sign dubious paperwork. She refused.

“I thought he would pull out his gun and shoot,” she said.

She said that in her city the drive for gender equality was largely led by the Patriotic Union of Kurdistan (PUK), one of two historical parties in Iraqi Kurdistan.

Yet some residents complain that the advances are largely cosmetic and aimed at masking the shortcomings of public services.

A junior partner in the Kurdistan regional government in Arbil, the PUK holds the post of speaker in the regional parliament, which it also awarded to a woman, Rewaz Faiq.

The party “believes in equality between men and women in all domains,” Faraj said.

“This has allowed us to achieve gender balance in administrative posts in Halabja,” said the head of the municipality, who has held the post since 2016.

Halabja prides itself on having had a woman mayor, Adela Khanum, in the first decades of the 20th century. Now it has another, Nuxsha Nasih.

It also has Kurdistan’s first female university dean, Mahabad Kamil Abdullah. “The Islamist parties were among the first to congratulate me when I became the president of Halabja University,” she said.

But it is by no means representative of the situation of women in Kurdistan as a whole. A 2018 UN report found that women in the workforce represent barely 15 percent of the women of working age. About three quarters of those work in the public sector.

In Iraq’s October 10 parliamentary election, more than 90 women were elected according to preliminary results, exceeding the minimum 83-seat quota established for women in the 329-seat chamber.

Though the Kurdistan region has cultivated an image of relative stability and tolerance, women’s rights activists say key issues like forced marriage and female genital mutilation have gone unaddressed.

“It is not enough to have women in high posts. There need to be more women in the lower ranks,” said Gulistan Ahmed, who heads the governmental commission for human rights in Halabja.

Many residents are more preoccupied with the failings of public services than with seeking gender equality.

“There have been no notable changes in the city under their mandate, whether at the level of public services or with the launch of new projects,” complained Wshyar Abdulkarim, a 45-year-old spice merchant.

Female market trader Mujda Ahmed said having women in top jobs had yet to lead to an improvement in services for women.

“I have worked in the market for six years and not a single person has built public toilets for women,” she said.

“I have the impression that they are being used by their parties, which simply want to improve their image on the issue of equality, nothing more.”

The Islamic State’s problem with women