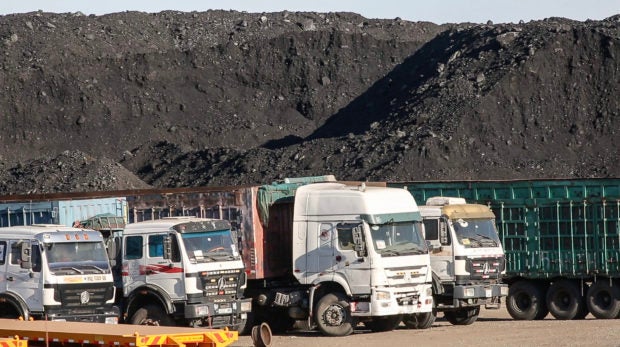 This video grab from footage taken on October 16, 2021 shows coal to be loaded on trucks near Gants Mod port at the Chinese border with Gashuun Sukhait, in Umnugovi province, in Mongolia.  AFP

TSAGAAN KHAD, Mongolia — Snaking across the barren Mongolian desert, a convoy crawls along the once-busy highway to the Chinese border — its truckers desperate to finally deliver their cargo of coal after months of brutal Covid-19 delays and no pay.

But now the line of trucks outside the tiny coal town of Tsagaan Khad has been reduced to a trickle, held up by China and Mongolia’s strict coronavirus measures, leaving the drivers stranded without pay or company.

“Our families are calling us and saying they need wood, fuel, and clothes to wear in winter,” said Davaasuren Tsogtsaikhan, 32, having waited three months to make a single delivery.

Last year, resource-rich Mongolia exported over 35 million tonnes of coking coal to China — this year so far is less than a third of that.

Some 3,500 increasingly wretched drivers have been quarantined in camps of 40 people while they wait.

Undrakh Bold told AFP he spent 42 days waiting without making a delivery, having been quarantined outside capital Ulaanbaatar after one member of his group tested positive.

After returning to Tsagaan Khad, the 43-year-old faced another 28 days of waiting.

“If all of us test negative, we will be able to transport our coal the next day,” the weary father-of-three said, as he queued to be tested.

On the Chinese side, they are not allowed out of their cabs, or even to open windows.

“I want to dump the coal in China, get my money and go back home,” he said.

Drivers are tested for Covid-19 in Mongolia then bussed over the Chinese border in masks and hazmat suits, where they undergo yet another test.

But now many drivers are considering finding other work.

“We worry about Covid test results all day and night,” said trucker Davaasuren, preparing to take his first test.

There is already a shortage of drivers, with numbers down by around half according to Tsagaan Khad officials, and the impact on the small town has been devastating.

The main street is empty, with canteens and shops closed.

If the Covid cases increase and China closes the border, “our economy will collapse,” frets Soronzonbold Purevjav, head of Tsagaan Khad’s emergency commission.

Anxious not to catch the virus, drivers stay inside their round white tents, dwarfed by huge piles of coal and rows of parked trucks.

“We keep an eye on each other all the time,” said Turtulga, a 32-year old driver.

Beijing has maintained a strict zero-Covid policy that has all but closed borders to the outside world.

The gridlock comes as China also battles an energy crunch that has seen widespread power cuts due to record coal prices and tough emissions targets.

The pair agreed to increase coal export volumes, according to a Chinese state media readout, with plans to allow double the number of trucks through the border — as long as they meet strict Covid requirements.

But it will take time to clear the backlog.

Yalagdashgui Naranpil, head of a truck drivers’ union, told AFP that the restrictions — including the closure of another border point — are making life near-impossible for the country’s drivers.

A handful of them protested in Ulaanbaatar last week, wearing face masks, high-vis jackets and holding signs reading “Save the lives of drivers”.

“We are on the edge of poverty,” Yalagdashgui said.