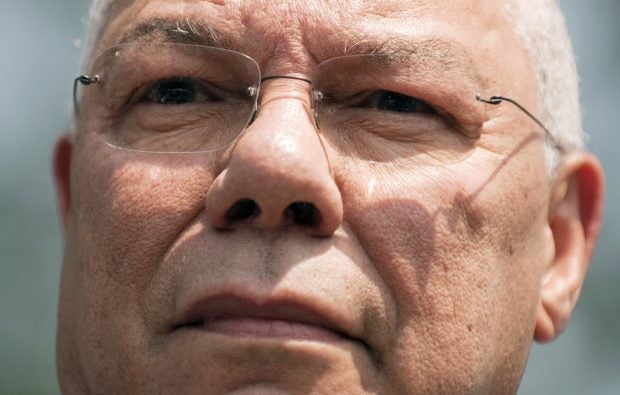 In this file photo taken on July 18, 2011, former US Secretary of State Colin Powell speaks at the White House in Washington, DC. (Photo by Jim WATSON / AFP)

WASHINGTON — Social media posts claim that Colin Powell’s death from complications caused by COVID-19 means vaccines against the disease are ineffective. But Powell had a type of cancer that experts say undermines the efficacy of the shots, and data shows his age left him especially vulnerable.

“PROOF this Vaccine does NOT EVEN WORK, or-and is NOT EVEN a REAL VACCINE,” said a Facebook post sharing an article about the retired four-star general and former secretary of state’s death.

Powell, a trailblazer in the military and US government, died on October 18 at Walter Reed National Military Medical Center.

His family confirmed that the 84-year-old was fully vaccinated against COVID-19.

In the immediate aftermath, opponents of the shots seized on that disclosure in numerous online posts as evidence that the vaccines do not work.

But Powell was especially vulnerable because of myeloma, a blood cancer that affects plasma cells that help produce antibodies against harmful pathogens.

In what might have been his last interview, Powell told journalist Bob Woodward that he had multiple myeloma, as well as a second underlying condition, Parkinson’s disease.

“If you had to choose a medical condition that would severely impact or diminish your response to vaccines, it would be multiple myeloma,” said Onyema Ogbuagu, an infectious diseases specialist at Yale School of Medicine.

Powell’s condition “severely limited his ability to mount a response to the vaccine… he’s an outlier, unfortunately,” Ogbuagu added.

Not only do multiple myeloma patients often mount a poor antibody response to COVID-19 vaccination, Icahn School of Medicine at Mount Sinai researchers “discovered that these patients also have a weak response from a different part of the immune system, known as T cells.”

Samir Parekh, a co-author of the Mount Sinai study, said that treatments for myeloma patients can make them even more immunocompromised.

However, study results showed that COVID-19 shots still offer protection, he said. “There’s no question that the vaccines work.”

Data released by the US Centers for Disease Control and Prevention shows that the elderly are more vulnerable to COVID-19, even if they are vaccinated — and Powell’s age put him in that high-risk group.