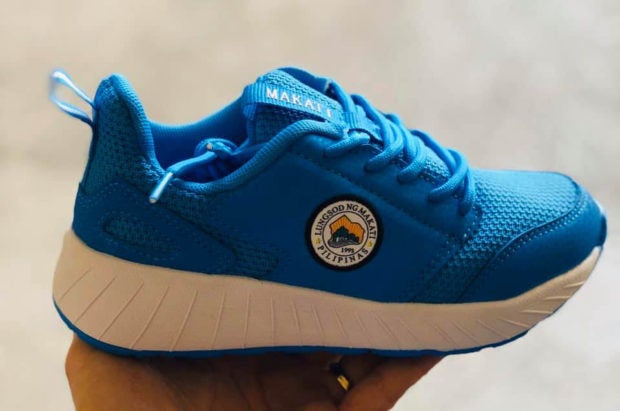 The cerulean blue-and-white shoes given for free by the Makati City government to the city’s public school students were found displayed on the shelves of a mall in Riyadh, selling for 24 SAR (Saudi riyal) or about P325 a pair.

An overseas Filipino worker (OFW), Glenn Morfe, shared a Facebook post showing the “Air Binay 3.0” patched with the seal of Makati City being sold in the Saudi Arabia capital.

“Libreng pamigay sa lungsod ng Makati ang sapatos na ito, bat napunta sa Saudi binenta na dito? (This pair of shoes is given for free in Makati, why is this sold here in Saudi Arabia?),” he said in a post which has garnered more than 9,400 reactions and 12,650 shares in one day.

“Ito sana ang pambibigay doon sa mga bata na masipag mag-aral na walang kakayahan makabili ng sapatos. (This should have been given to hardworking students who don’t have the means to buy shoes),” he added.

In a separate YouTube video, Morfe and fellow OFWs called on the Makati City government to investigate the incident, while dismissing claims that the shoes were a counterfeit version of the Air Binay 3.0 distributed in Makati City.

The city government promptly issued a statement on Monday, saying that it had asked its manufacturers and suppliers to investigate the matter.

“This (the shoes sold in Riyadh) is not related in any way to the city government of Makati and the Department of Education-Makati,’’ it said in a post.

Lawyer Michael Camiña, the city legal officer, confirmed to the Inquirer that the City Hall has raised the incident with the Air Binay supplier, Amsor Enterprises.

Not for commercial use

“We are deeply alarmed with the sale of the Air Binay shoes. We sent an email and letter to the supplier to investigate the matter. The shoes and seal of Makati are for the exclusive use of Makati City and its beneficiaries and not intended for commercial use or distribution,’’ Camiña said in a message.

He said the city government is conducting a probe and “will file appropriate charges as needed.”

The nickname Air Binay—a play on the famous Air Max line of the Nike brand—was first coined by netizens after Makati released its first version of white and electric blue rubber shoes in 2018 as part of its free supplies for Makati public school students.

The city has since released a version every year with different colorways. The third iteration AB 3.0 was distributed last year under the city’s Project FREE or Free Relevant Excellent Education.

Makati Mayor Abby Binay distributed over 93,000 pairs of the rubber shoes in February last year for kinder to high school students in the city. More than 240,000 pairs have been distributed since its launch, according to the city information office.

The purchase order for the AB 3.0 edition was awarded in December 2019 to Pasay-based Amsor Enterprises for offering the lowest calculated bid of P153.7 million, slightly lower than the city’s allocation of P153.8 million.

In the same year, Amsor Enterprises also won a P157-million contract for the purchase of leather shoes and socks under the same project.

Mayor Binay announced last month on social media that the City Hall is preparing to give away the fourth iteration of the rubber shoes to be dubbed “Air Binay 4.0.” INQ