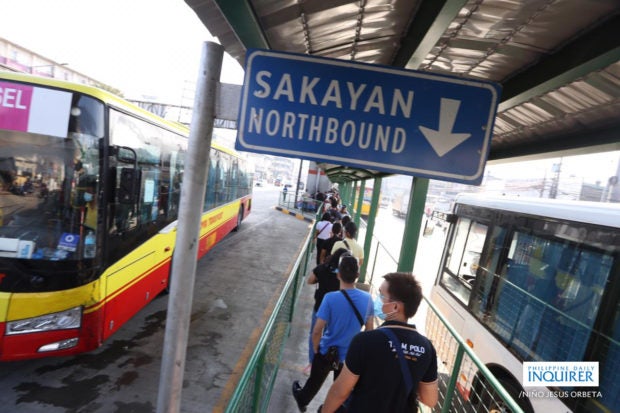 MANILA, Philippines — The Land Transportation Franchising and Regulatory Board (LTFRB) ordered the two consortiums operating along the Edsa Busway to explain why they failed to deploy enough buses and to pay their drivers and conductors despite having received payments from the government for the free ride program.

In a show-cause order dated Oct. 18, the LTFRB asked ES Transport and Partners Consortium and the Mega Manila Consortium Corp. to explain in writing why their special permits or franchise will not be canceled, suspended, or not penalized for the low turnout of bus units that led to long queues at Edsa Monumento on Monday.

According to the LTFRB, the consortiums deployed only an average of 167 units hourly from 4 a.m. to 11 a.m. that day.

But the agency pointed out that 531 bus units under the two consortiums were given special permits to operate.

Responding to reports that drivers and conductors have remained unpaid despite giving full service to the “Libreng Sakay” program of the government, Martin Delgra, chair of the LTFRB, stressed that the two consortiums were already paid under the service contracting program.

The LTFRB, however, did not disclose how much had been disbursed to the bus companies.

“I’d like to remind the bus operators, this is just not a contractual obligation but it is also an obligation that is mandated under the Labor Code,” said Delgra, adding that they have to pay the wages of their drivers and conductors even if they believe they will not profit in the long run.

Also on Monday, the Department of Transportation (DOTr) said it would recommend to the Inter-Agency Task Force for the Management of Emerging Infectious Diseases (IATF) an increase in passenger capacity in public utility vehicles (PUVs).

Steve Pastor, assistant secretary for road transport and infrastructure, said the increase in passenger capacity would help the transport sector “cope up with the increased number of individuals using public transport due to the imposition of a more relaxed quarantine status.”

Pastor said they were still finalizing the details of the proposal to the IATF to make sure that it was based on technical expertise and backed up by medical studies.

But he said the increase “will be significant” from the current 50 percent capacity limit of PUVs, amid the ongoing alert level 3 quarantine status in Metro Manila.

Pastor said Transportation Secretary Tugade stressed the need for safety in considering increasing PUV passenger capacity. He said they were gathering relevant data to back up the proposed increase to help the operators and drivers.

The DOTr said that in crafting the proposal, the agency would also take into consideration the specific safety protocols being imposed by different local governments at this time. INQ

Read Next
PH logs 4,496 new COVID-19 infections
EDITORS' PICK
PH to import 60,000 tons of fish to cover shortage
Gear up and get ready to play with Yamaha Mio Gear
Over 3 Million worth of prizes to be won at Smart Padala’s SENDali Manalo Promo!
Acer starts the year off strong with the Aspire Vero National Geographic Edition
#VotePH2022: COVID, power woes loom as poll concerns
Workers are exempted from ‘no vax, no ride’ policy – DOLE chief
MOST READ
1Sambayan names 7 aspirants in its 2022 Senate lineup
Cold-case investigation names surprise suspect in Anne Frank’s betrayal
Guevarra to Acosta: Obey rules on unvaccinated
Emma Stone calls Andrew Garfield a ‘jerk’ after he ‘lied’ about his ‘Spider-Man: No Way Home’ appearance
Don't miss out on the latest news and information.