Top US envoy to Afghanistan stepping down 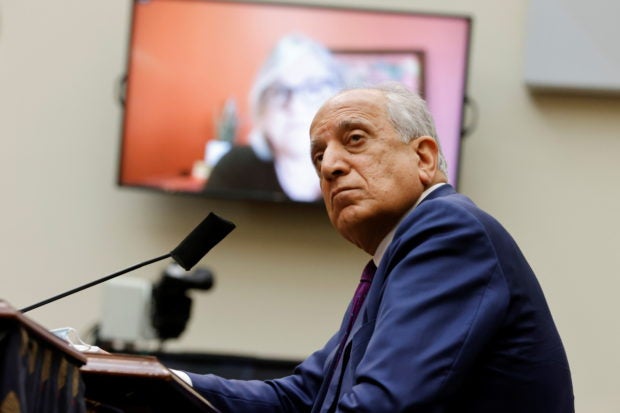 U.S. Special Representative for Afghanistan Reconciliation Zalmay Khalilzad listens to a video question from U.S. Representative Susan Wild (D-PA) as he testifies about the potential withdrawal of U.S. military forces from Afghanistan at a hearing before the House Foreign Affairs Committee on Capitol Hill in Washington, U.S. May 18, 2021. REUTERS FILE PHOTO

WASHINGTON — Top U.S. envoy to Afghanistan Zalmay Khalilzad is stepping down, the State Department said on Monday, less than two months after the chaotic U.S. withdrawal from Afghanistan and the Taliban takeover of the country.

Khalilzad will be replaced by his deputy, Tom West, Secretary of State Antony Blinken said in a statement, noting that West will work closely with the U.S. embassy, which is now based in Doha, on U.S. interests in Afghanistan.

A person familiar with the matter said on condition of anonymity that Khalilzad submitted his resignation on Friday.

His departure follows his exclusion from the Biden administration’s first formal talks with the Taliban after the U.S. pullout, held in Doha earlier in October.

Khalilzad did not immediately respond to a request for comment.

Khalilzad, born in Afghanistan, held the post since 2018 and spearheaded the negotiations with the Taliban that led to the February 2020 agreement for the withdrawal of U.S. forces this year.

He then pressed the hardline Islamist movement and the Western-backed government of former Afghan President Ashraf Ghani to negotiate a political settlement to decades of strife.

In mid-August, the government collapsed as the Taliban swept through the country and marched into the capital, Kabul, unopposed. Khalilzad was left seeking the militants’ assistance in the U.S. evacuation of U.S. citizens and at-risk Afghans who worked for the U.S. government.

Current and former U.S. officials told Reuters earlier that in the three years Khalilzad had been in the role, he became the face of one of the largest U.S. diplomatic failures in recent memory.

U.S. officials, who spoke on the condition of anonymity, said the veteran American diplomat relinquished leverage to the militant group, continuously undermined the Afghan government, and had little interest in hearing different viewpoints within the U.S. government.