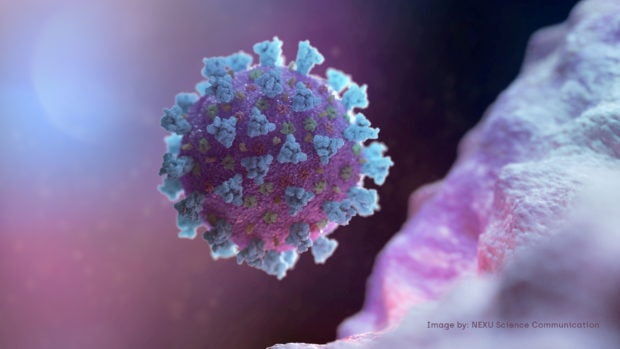 FILE PHOTO: A computer image created by Nexu Science Communication together with Trinity College in Dublin, shows a model structurally representative of a betacoronavirus which is the type of virus linked to COVID-19, shared with Reuters on February 18, 2020. NEXU Science Communication/via REUTERS

MANILA, Philippines — The average of new COVID-19 cases in Davao City in the previous seven days was at 122, a 31-percent decrease compared to the previous week, OCTA Research said Tuesday.

According to the OCTA report posted by Guido David on Twitter, Davao City remains under moderate risk for COVID-19 based on the research group’s metrics.

The COVID-19 reproduction number, or the average number of new infections estimated to stem from one positive case, is at 0.55 in Davao City, according to the independent pandemic monitoring group. Experts earlier said that the ideal reproduction number is less than one to indicate a downward trend in cases.

Meanwhile, the current average daily attack rate (ADAR) in the city was 6.71 people per day per 100,000 population. OCTA Research said this level of ADAR is considered moderate risk.

Davao City was the seventh local government unit in the country with the most new cases of COVID-19 logged on Monday, David said in a separate tweet, citing data from the Department of Health (DOH). The DOH reported 104 new cases in the city on Monday.

Davao City now has 1,411 active cases of the disease, according to the DOH tracker. Nationwide, the active cases were at 68,832.

The Philippines is seeing a decline in new COVID-19 cases after previously posting over 20,000 new infections in September, according to the health department. On Monday, only 6,943 new cases were reported nationwide.