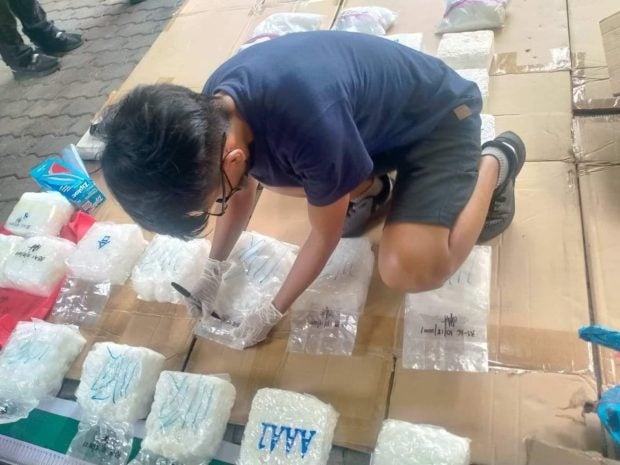 CONTRABAND A drug sting by the Philippine Drug Enforcement Agency (PDEA) and the Philippine National Police yielded P262 million worth of “shabu” (crystal meth) recovered from four Chinese men, who were killed during a shootout with operatives in Angeles City on Monday. —PDEA PHOTO

MANILA, Philippines — Just as the Philippine National Police announced its review of the draft of a deal for a joint probe on drug war deaths with the National Bureau of Investigation, four Chinese nationals were killed in a shootout with antinarcotics operatives on Monday in Angeles City in Pampanga province.

The joint sting operation by the PNP and the Philippine Drug Enforcement Agency (PDEA) resulted in the seizure of 38 kilograms of “shabu” (crystal meth) worth P262.2 million recovered from a house at Punta Verde, a residential subdivision in Barangay Pulong Cacutud of the city, used by the Chinese nationals for their clandestine operation.

The buy-bust operation was conducted by the PDEA and the PNP, backed by military personnel, at around 10 a.m. on Monday along Gadiola Street of Punta Verde Subdivision.

Instead of surrendering, the suspects allegedly shot it out with the anti-illegal drug operatives, which resulted in their deaths.

Aside from the drugs, the Chinese nationals also yielded four .45-caliber revolvers, two mobile phones, a weighing scale with charger; and the marked money used by the PDEA operatives.

He added that they were connected with the notorious Basher drug syndicate led by Basher Bangon, who was killed in a shootout with antinarcotics operatives on Sept. 9 this year.

Bangon, 59, a native of Cagayan de Oro City, and a cohort, Danilo Untavar, 51, were killed in Bacoor, Cavite province, in a shootout with PNP and PDEA operatives who raided their warehouse, where P1.25 billion worth of shabu was later recovered.

Meanwhile, Eleazar said on Monday that the PNP was reviewing the memorandum of agreement (MOA) with the NBI, drafted by the Department of Justice (DOJ), for the joint investigation on anti-illegal drug operations resulting in deaths.

The DOJ completed the draft over the weekend and forwarded a copy to the PNP.

Eleazar said that as soon as the review was completed, both the PNP and the NBI would sign the deal and commence working together in investigating and building cases on drug war deaths where there were lapses committed by police personnel.

“This serves as an assurance to our ‘kababayan’ (fellow Filipinos) that we are serious in our commitment to ferret out the truth on the questionable cases, to hold accountable those who committed abuses and to institutionalize reforms to further professionalize your PNP,” he said.

Recently, the DOJ concluded its review of 52 cases involving more than 150 policemen who took part in anti-illegal drug operations since July 2016.

—WITH A REPORT FROM TONETTE OREJAS INQ