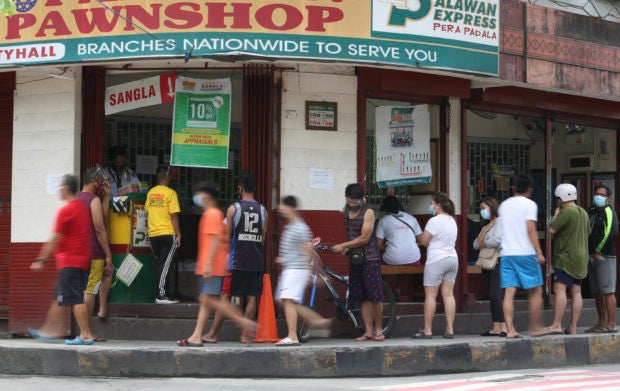 LIFELINE The neighborhood “sanglaan’’ has become the go-to solution, if not the last resort, for many Filipino breadwinners left jobless. —MARIANNE BERMUDEZ

MANILA, Philippines — Some senators questioned the billions in funding for the programs of the Department of Social Welfare and Development (DSWD) every year when unemployment and child stunting rates are not improving.

Senator Panfilo Lacson was the first to raise this issue during the DSWD’s budget hearing at the Senate, pointing to the DSWD’s Pantawid Pamilyang Pilipino Program (4Ps), the budget of which continues to increase over the years.

“4Ps” is a government initiative that offers conditional cash grants to the country’s poorest of poor families.

The budget for the program increased from P62.6 billion in 2016 to P89.7 billion in 2019. Lacson pointed out that attempts made in recent years to reduce unemployment have not substantially improved.

(If we juxtapose this with our unemployment rate with the aid we are providing…I understand that we give assistance through 4Ps to improve their lives to graduate from the program. What I can’t reconcile is that the unemployment rates are nearly unchanged.)

Senator Imee Marcos agreed with Lacson’s observation, noting that the 4Ps “had no long-term impact on unemployment figures.”

“Yan ang findings ng World Bank kahit patuloy silang nagpapautang [That is the findings of the World Bank even though they continue to loan money for the program],” Marcos said.

DSWD National Program Manager for 4Ps Gemma Gabuya said the program is “very dependent” on the Department of Labor and Employment and other agencies when it comes to the economic component of the program.

“4Ps has been a program for the last 13 years and this is primarily an investment on the children of poor families. So, for that 13 years, mga [around] 1.9 million pa lang po ang nabigyan ng [only were given] livelihood,” she added.

Gabuya said the program focuses on ensuring that the children of 4Ps families continue their education and eventually escape the “generational cycle of poverty where they have been trapped in.”

“Maka-avail sila ng [That they are able to avail] preventive health services para po when they become adults, they have the best fighting chance in escaping the inter-generational cycle of poverty where they have been trapped in,” she told senators.

(So we can see that the impact is actually long-term because the beneficiaries just graduated high school and then will still have to go through college and we should ensure under the 4Ps that they will continue their education at least until they are 18 years old or until they graduate high school.)

Lacson was still not satisfied by the explanation given by the DSWD official, saying he could not understand why the budget for the program continued to increase.

In response, Gabuya said that the beneficiaries that have graduated from the program are replaced with new ones.

(We maintain our target beneficiaries to 4.4 million until 2022 in case there is a beneficiary family that graduates, there are replacements that are considered additional beneficiaries.)

(So we have replacements who are newly registered under the 4Ps, so the budget allocated is for them.)

Lacson also took note of childhood stunting in the country, citing data from the United Nations Children’s Fund (Unicef), which he said showed that one out of 3 Filipino children is “short for their age and too thin for their height.”

(So the data on our stunting rates don’t change. So if we have a feeding program, why are we not decreasing malnutrition in the country.

(Unicef’s observation here is there is poor diet, inadequate nutrition and food systems are failing them. Meaning our program for infants is failing.)

(For the last five to six years, we are funding the program with some P23 billion. Maybe we can recalibrate the program?)

Marcos, for her part, said this is “a matter of deep concern.”

“The stunting data seems immovable, hindi na nag-improve [It is not improving],” she added.