New Zealand to cast out its official wizard 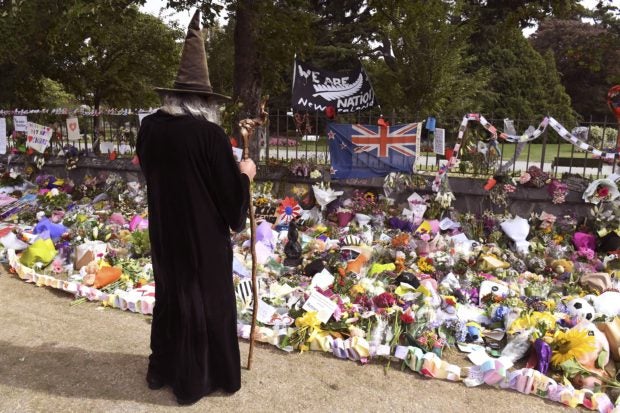 Ian Brackenbury Channell, known as the Wizard of New Zealand, stands before a memorial at the Botanic Gardens in Christchurch on March 21, 2019, six days after the twin mosque shooting massacre that claimed the lives of fifty people. – New Zealand is banning the sale of assault rifles and semi-automatic weapons with almost immediate effect, Prime Minister Jacinda Ardern said on March 21, rapidly making good on a pledge to tighten the country’s gun laws. (Photo by WILLIAM WEST / AFP)

CHRISTCHURCH—New Zealand is losing its official wizard. Nearly 40 years after the city of Christchurch begged their wizard to stay, the council has told the charismatic sorcerer he has to go.

The 88-year-old wizard, also known as Ian Brackenbury Channell, has been a popular tourist attraction for more than three decades, addressing crowds in the city center, with his flowing beard, straggly hair, long black robe, and pointy hat.

Nothing was off-limits for the modern-day Merlin, from castigating politicians to successfully leading a campaign to stop “an attack on the soul of the city” when it was announced the red public phone booths would be repainted blue.

He has been in demand casting spells to influence the outcome of events such as crucial rugby matches and being transported to Australia to perform a rain dance.

“It is a difficult decision to end this contract,” the Christchurch City Council assistant chief executive Lynn McClelland said. “The council is grateful for the valuable and special contribution The Wizard made to our city’s cultural life, and he will forever be a part of our history.”

But McClelland said wizardry no longer fits the “promotional landscape” of the South Island’s largest city, and new programs “will increasingly reflect our diverse communities and showcase a vibrant, diverse, modern city.”

British-born Channell, a former airman with the Royal Air Force and a graduate from the University of Leeds with a double honors degree in psychology and sociology, arrived in Christchurch in 1974.

The council’s first reaction when he began his public speaking was to try to have him arrested, but he proved so popular that 10 years later when he threatened to leave after a spell backfired at a rugby match, the council campaigned for him to stay.

“This was a welcome change of attitude by the city council after years of ill-concealed hostility,” Channell said.

The council appointed him “Wizard of Christchurch,” the New Zealand Art Gallery Directors Association made him “an authentic living work of art,” and in 1990, Prime Minister Mike Moore named him the official “Wizard of New Zealand.”

Since 1998, Channell has been paid NZ$16,000 ($11,300) annually by the council “to provide acts of wizardry and other wizard-like services,” and he said he was not happy about being sidelined.

“They are a bunch of bureaucrats who have no imagination,” he told the Stuff news website. “They are not thinking of ways to promote Christchurch overseas.” —AFP