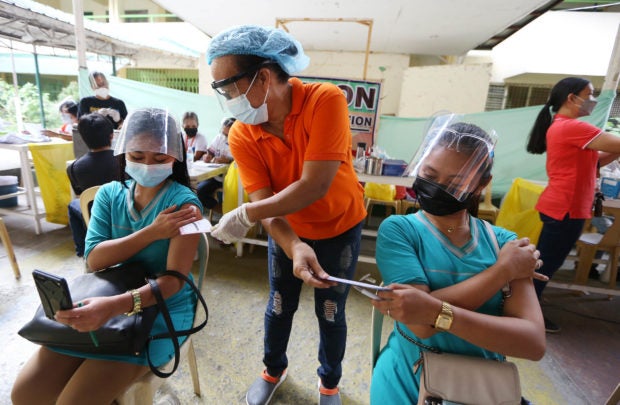 MANILA, Philippines — Some employers are unlawfully withholding the salary of their employees until they can prove that they have already been fully vaccinated against COVID-19, a major labor organization claimed on Sunday.

“(We) strongly condemn as inhuman and illegal the ‘no vaccine, no salary’ scheme imposed by employers on their unvaccinated employees,” said the Trade Union Congress of the Philippines (TUCP).

The TUCP noted that several workers from different establishments have reported that they were not paid their salaries because their supervisors required them to first present their vaccination cards.

It said the affected workers were afraid to be identified and complain because they might get fired, and instead asked the TUCP to intervene on their behalf.

“The TUCP strongly condemns workplace arm-twisting being done by these employers. This is clearly an act of reprehensible discrimination and harassment imposed on helpless workers,” TUCP president and party list Rep. Raymond Mendoza said.

“We warn employers that such a scheme to compel workers to get vaccinated is unlawful,” he added.

He said Article 116 of the Labor Code prohibits employers from withholding the wages of their workers “by force, stealth, intimidation, threat, or by any other means whatsoever without the worker’s consent.”

He also cited Section 12 of Republic Act No. 11525 or the Act Establishing the Covid-19 Vaccination Program, which became law last February.

The provision states that vaccine cards “shall not be considered as an additional mandatory requirement for education, employment and other similar government transaction purposes.”

The TUCP said it would provide the Department of Labor and Employment (DOLE) with the names of the establishments that enforce the “no vaccine, no salary” scheme, urging the labor department to immediately conduct inspections to protect the workers’ rights.

Mendoza also urged the Dole to issue another labor advisory “clearly outlining the fines and imprisonment imposable on employers for withholding the salaries of unvaccinated employees.”

“The [labor department] must act immediately before this practice spreads and becomes a norm,” he warned.

Business leaders on Sunday said this should not happen because it is currently illegal. However, they had different opinions when asked if the government should eventually allow the private sector to require their employees to be vaccinated.

Sergio Ortiz-Luis Jr., president of the Employers Confederation of the Philippines (Ecop), said companies were not allowed to require their employees to be inoculated.

He added that the policy should not shift to a vaccine mandate, especially when the problem was due to supply constraints, instead of vaccine hesitancy.

“Why are we demonizing the unvaccinated? [In the case of] many of them, it’s not their fault. We don’t have enough vaccines. Why are we making them suffer for it?” he said in a mix of English and Filipino. He said companies should instead focus on implementing their minimum health protocols.

But other groups do not share the position of Ecop. Earlier this month, 13 business groups and organizations issued a joint statement saying the government should allow them to deny the job application of unvaccinated individuals, among other policies.

Go Negosyo, one of the signatories, said on Sunday that they were still hoping the government would allow a vaccine mandate for labor-intensive businesses sometime in the future.

But for now, its founder and Presidential Adviser for Entrepreneurship Joey Concepcion said these policies were still not legal, although he had not heard of any companies that have implemented them yet.

“At this point in time, I don’t know of any employer doing that. There is no ordinance or memorandum coming yet from the IATF (Inter-Agency Task Force for the Management of Emerging Infectious Diseases) or the President that this is allowed,” Concepcion.

Still, Concepcion said they were pushing for a mandatory vaccination “in areas that are labor-intensive,” which, he said, included offices, retail stores and manufacturing companies.

“That is where we are requesting [to] mandate that everybody should be vaccinated because the unvaccinated would be at the highest risk because they wouldn’t have protection,” Concepcion said.

“While we also steadfastly believe that everyone has the right to decide on vaccination, we do believe that the state and the private sector should be able to restrict the activities of unvaccinated persons for the common good,” they said.

Last March 12, after the official COVID-19 vaccination rollout started, the labor department issued a circular warning employers against firing or discriminating against workers who would refuse to get vaccinated.

It stated that while employers should encourage their employees to get vaccinated, their failure or refusal to do so is not a ground for their dismissal. Neither can such failure or refusal be used to justify discrimination in terms of tenure, promotion, training, pay and other employment benefits.

It said employers should only encourage their workers to get vaccinated. Employers also could not pass on the cost of any company vaccination program to the workers. The labor department issued the same clarification in June 2021 after the national government began rolling out the program to immunize 35.5 million people belonging to the A4 category.

The COVID-19 task force simplified the A4 criteria to include private sector workers who needed to be physically present in their workplace.

On Aug. 5, the Department of Health (DOH) reiterated that the “no vaccine, no work” policy was not allowed after crowds rushed to vaccination sites in Metro Manila due to rumors that unvaccinated persons would not be entitled to government cash assistance or permitted to report to work during the lockdown.