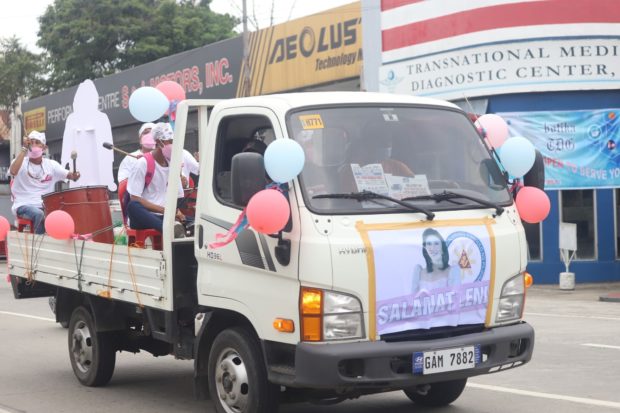 LEGAZPI CITY—Hundreds of motorists in different types of vehicles joined convoys that simultaneously drove through major thoroughfares in the cities of Legazpi, Sorsogon, Naga and Masbate and the capital towns of Virac in Catanduanes and Daet in Camarines Norte on Saturday morning to show their support for Vice President Leni Robredo who is running for the presidency in the 2022 elections.

The University of the Philippines Alumni Association (UPAA) in Bicol launched the caravan that also aims to thank Robredo for her decision of run for the highest position in the country.

Christopher Dy-Liacco Flores, UPAA-Mayon Chapter member, in a phone interview Thursday said the caravan was also participated in by other organized volunteer groups such as the Solid Leni Bicol (SLB), Pink Army (PA), and the Pink Ribbon Movement (PRM).

Clad in pink shirts and bearing pink ribbons, the caravans started around 7 a.m. in most areas. Robredo, who is running as an independent candidate, has adopted pink as her campaign color.

Flores said the caravan would promote a strong “people movement that would help Robredo in restoring the country on its right course.

He said it is meant to help Robredo reach out with other sectors of society in finding for the right path in solving the current ills of the country.

In this city, the Joy Ride for Leni caravan was joined by more than 500 cars and started at the Legazpi City Boulevard and passed through the towns and cities around Mayon Volcano – Sto. Domingo, Malilipot, Tabaco City, Polangui, Oas, Ligao City, Guinobatan, Camalig, Daraga, and Legazpi City. It ended in this city’s center with a short program.

In Masbate City, Masbate, the caravan is also dubbed the Pink Drive Masbate where 30 private cars with pink ribbons and tarpaulins, including several motorcycles and bicycle riders, joined and covered the main streets of the city before they proceed to the towns of Mobo and Milagros.

Robredo is a native of Naga City in Camarines Sur province. She is the wife of late Naga City mayor and Interior Secretary Jesse Robredo.