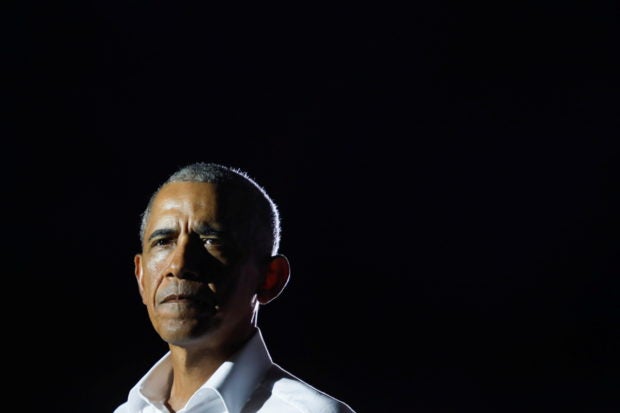 WASHINGTON — Former U.S. President Barack Obama will travel to Glasgow, Scotland in November to attend the COP26 climate summit where he will meet with youth activists and address the threat of climate change, his spokesperson said on Friday.

“He will lay out the important progress made in the five years since the Paris Agreement took effect, highlight the leadership of young people around the globe, and urge more robust action going forward by all of us – governments, the private sector, philanthropy, and civil society,” said Hannah Hankins, spokesperson for the 44th U.S. president.

News of Obama’s presence in Glasgow comes as President Joe Biden aims to drum up momentum ahead of the October 31-November 12 summit. Biden confirmed on Thursday that he will attend the opening of the summit after participating in the Group of 20 leaders summit in Rome.

The White House said it will bring 13 high-level officials and cabinet members to the gathering on Thursday, demonstrating its “all of government” approach to tackling climate change.

Since rejoining the Paris climate agreement when Biden took office in January, the administration set a goal to slash greenhouse gas emissions by 50-52% over this decade.

But the president is at risk of arriving in Glasgow without much progress to show. A lot rides on whether the U.S. Congress will pass key infrastructure and budget bills that would set clean power and transportation goals and unleash trillions in spending.

U.S. Congress members from Biden’s Democratic party have been negotiating about the bills, with some opposed to the price tag and climate measures. Biden needs solid Democratic support because the measures are opposed by Republican lawmakers.

Energy Innovation, a California-based research group, said these bills, if combined with state policies and executive action, could set the United States on a path to achieve its 2030 target.

Obama, during his first term as president in 2009, traveled to Copenhagen where he helped directly intervened in climate summit negotiations with other world leaders that resulted in an agreement that for the first time called emission pledges by all major economies, not just industrialized nations.

Read Next
US Capitol Police officer charged with telling rioter to destroy evidence
EDITORS' PICK
Metro Manila to remain under COVID Alert Level 2 until December 15
IATF tightens border control, suspends entry of fully vaxxed nationals from ‘green’ countries
Legarda: Ending Violence Against Women, a cause for all
Duterte open to making jabs mandatory; Cabinet mulls ‘pressuring’ the unvaccinated
Villar Group gears up for AllValue Shopping Party on Dec. 3; around P 1-million promos and discounts up for grabs
A delightful blessing!
MOST READ
Quiboloy warns of ‘much worse than Omicron virus’ if his ‘persecution’ is not stopped
Omicron poses ‘very high’ global risk, countries must prepare–WHO
IATF tightens border control, suspends entry of fully vaxxed travelers from ‘green’ countries
Marcoleta defends pol ads on ABS-CBN
Don't miss out on the latest news and information.