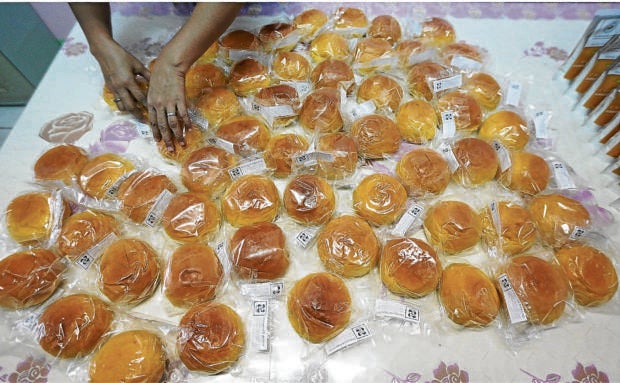 FORTIFIED, ENHANCED, IMPROVED Since being introduced in the 1970s, the nutribun has transcended changes in the national administration as the hefty bread of choice for school and community feeding programs. —GRIG C. MONTEGRANDE

The Department of Science and Technology (DOST) launched on Friday its latest enhanced nutribun (e-nutribun) variant with the flavor and nourishing properties of sweet potato, locally known as “kamote.”

Like the earlier iterations, the pastry—whose origins date back to the Marcos regime—is an excellent source of natural fiber, energy, protein, iron, calcium, potassium and zinc, and has zero trans-fatty acids and cholesterol, according to the DOST’s Food and Nutrition Research Institute (FNRI).

The newest variant particularly uses sweet potatoes of the yellow-fleshed variety (kamoteng dilaw) but retains the original recipe’s “sweet, delicious and milky taste” that both children and adults can enjoy, according to the FNRI.

A 165-gram serving contains 507 calories, 356 milligrams of calcium, 17 grams of protein, 5 mg of iron, and 612 micrograms of Vitamin A. When packed in polyethylene plastic, it can last up to five days at room temperature.

Citing the pandemic and ensuing lockdowns that depleted the incomes of millions of families across the country, DOST-FNRI Director Imelda Angeles-Agdeppa called on the agency’s partners for continued support in addressing malnutrition among Filipino children, by providing them with the “right kinds of food” like the nutribun.

At present, there are 151 pastry companies and community bakeries nationwide that are making the bread’s squash variant and 101 others producing the carrot variant.

The DOST-FNRI reformulated the nutribun of the 1970s and launched the first version of e-nutribun made from squash in July 2020, followed by the carrot variant in April this year.

The agency believes that having more choices or varieties should address the problem of “taste fatigue” (pagkasawa) especially among kids.

Nancy Bantog, regional director of the DOST Cordillera Administrative Region, said it was Science Secretary Fortunato dela Peña who encouraged the development of new nutribun variants, capitalizing on the agricultural produce native to her region in northern Luzon.

The sweet potato grown in the Cordillera, for example, is a resilient crop that could survive typhoons and be available all yearround, she noted.

Resembling the Filipino breakfast staple “pan de sal,” but denser and thus harder to chew, the nutribun was introduced in the early 1970s under a feeding program for children in public elementary schools, then supported by the United States Agency for International Development (USAID) Nutrition.

It was made of wheat-blend flour and dried, nonfat milk donated by the United States, with the recipe developed by USAID Nutrition and adopted by local bakeries tapped by the government.

Some 200,000 elementary school students were given the bun as a snack in a pilot test during school year 1970-1971. The following school year, the program was expanded to cover about 1.3 million pupils.

Considered a “complete, ready-to-eat meal” in itself, it was widely distributed as a food relief item in the aftermath of the devastating floods that hit Central Luzon in 1972.

Since the start of the pandemic, the government has stepped up its supplementary feeding program for children by serving nutribun with milk.

Last year, the program found a major partner in the public sector, with San Miguel Corp. producing batches of nutribun for distribution through civic and humanitarian groups in the poorest communities in Metro Manila.

Read Next
Vax for minors with comorbidities expands to all 17 local gov’ts in NCR next week
EDITORS' PICK
Smart offers wireless fiber-like speeds to Filipino homes with country’s first 5G Prepaid Home WiFi
Legarda: Ending Violence Against Women, a cause for all
This new condo in the South will make you want to turn a new leaf
National COVID-19 vaccination drive gets over 5.3 million people vaxxed so far
Pandemic prognosis: Where does it go from here?
Google won’t accept election ads for 2022 national polls
MOST READ
Bongbong Marcos to face another disqualification case
Christine Bersola, Julius Babao cleared of cancer after colonoscopy, endoscopy
‘Maraming nagpapagkamatay sumali’: Bongbong-Sara’s full Senate slate out soon, says Imee
Tropical storm intensifies as it approaches PAR
Don't miss out on the latest news and information.