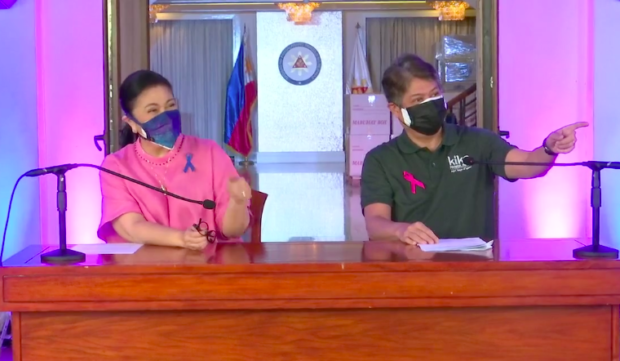 Vice President Leni Robredo and Senator Francis Pangilinan listen to questions during the announcement of the latter’s candidacy for vice president in the 2022 elections. Screengrab from Facebook/OVP

MANILA, Philippines — While they respect Vice President Leni Robredo’s choices for her Senate slate, members of the progressive coalition Laban ng Masa claimed that the lineup reeks of traditional Philippine politics, where the elections are reduced to a mere “game of numbers, popularity, and bailiwicks.”

Laban ng Masa in a statement on Friday said that the framework of Robredo’s senatorial slate, which was announced earlier, used a framework that banks on popularity and money — which is supposedly a characteristic of traditional politics.

Such choices, they said, are no longer surprising.

“Traditional Philippine politics is the playground of the elite, landlords, billionaires, and giant corporations. It is a game of numbers, popularity, bailiwick, and money, and it is within this framework that VP Leni Robredo has chosen her Senatorial slate,” Laban ng Masa said.

“We at Laban ng Masa are not surprised with how the liberal opposition chose their candidates. Though we do not agree, we nonetheless respect their decision,” it added.

Robredo, who seeks to unite the opposition under her presidential bid for the 2022 national elections, earlier announced six more names that would complete her Senate line-up.

While there is still one spot left in the ticket, former Bayan Muna lawmaker and long-time activist Neri Colmenares was notably missing from the slate.  When asked if Colmenares is still being considered for the slate, Robredo said yes, adding that there are other names being deliberated upon.

READ: Robredo wants 12th candidate in Senate slate to be from marginalized sector

Just this Wednesday, Colmenares and other sources confirmed to INQUIRER.net that he and labor leader Sonny Matula are currently in talks with Robredo’s camp about a possible inclusion to her Senate slate.

READ: Colmenares in talks for spot in Robredo’s Senate slate

Earlier, Colmenares assured the public that whatever happens in the alliances that would be built before the 2022 national elections, he and the Makabayan coalition would remain focused on pushing for a people’s agenda.

On the other hand, Laban ng Masa — which is supporting the presidential candidacy of labor leader Ka Leody de Guzman, said that politics being left to the elite is part of the reason why they decided to field their own candidate.

“Laban ng Masa’s decision to field a candidate is precisely a repudiation of traditional Philippine politics. It is within this framework that Laban ng Masa crafted its slogan #BagongPulitika,” Laban ng Masa said.

“We believe that the platform and agenda of the working class and marginalized sectors should be at the forefront in every elections since we represent the 99% of the population. Our representatives should have a seat in every table, and not be used as mere deodorizers to otherwise traditional formations,” they added.