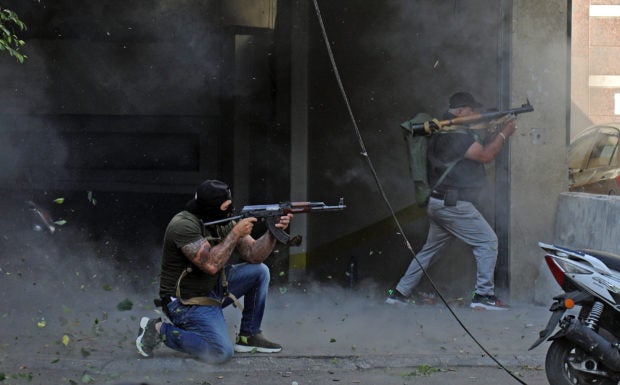 Shiite fighters from Hezbollah and Amal movements take aim with (L to R) a Kalashnikov assault rifle and a rocket-propelled grenade launcher amidst clashes in the area of Tayouneh, in the southern suburb of the capital Beirut, on October 14, 2021. (Photo by IBRAHIM AMRO / AFP)

The army deployed tanks and troops to quell street battles that sparked memories of the 1975-1990 civil war for a city already traumatized by last year’s blast disaster and Lebanon’s worst-ever economic crisis.

Bullets smashed into houses, while panicked civilians cowered indoors as the sound of gunfire and grenade blasts mixed with the wail of ambulance sirens for more than three hours.

The bloody unrest broke out after shots were fired at a demonstration by the Muslim Shiite Hezbollah and Amal movements.

The protesters were rallying against judge Tarek Bitar, tasked with investigating the massive explosion of poorly stored ammonium nitrate at Beirut’s port that killed more than 210 people and destroyed swathes of the capital on August 4 last year.

The judge had in recent days been in the sights of Hezbollah and Amal after he subpoenaed top officials in his probe.

“Weapons cannot return as a means of communication between Lebanese parties, because we all agreed to turn this dark page of our history,” he said in reference to the civil war.

He said political leaders were “heading towards a solution” out of the crisis.

Arrests on both sides

The army said it had responded to an exchange of gunfire in the Tayouneh-Badaro area as protesters headed to the Palace of Justice.

It “raided a number of places looking for the shooters, and detained nine” people in total, including individuals from both sides. One was of Syrian nationality, it said.

The military did not specify who started the firefight.

Interior Minister Bassam Mawlawi said the “exchange started with sniper fire, with the first casualty shot in the head.”

He said at least six people were killed, all by gunfire, without specifying who fired the shots.

Among those killed was a 24-year-old who was hit in the head by a stray bullet inside her home, a doctor at Beirut’s Sahel hospital told AFP.

Amal said three of its members had died while taking part in a “peaceful protest.”

Heavy fire rang out as ambulances rushed the wounded through the deserted streets, a few blocks from the Palace of Justice.

Iran-backed Hezbollah and Amal blamed the Lebanese Forces, a Christian party that is staunchly opposed to them, charging in a joint statement that the opposing side had “fired sniper shots with the aim to kill.” 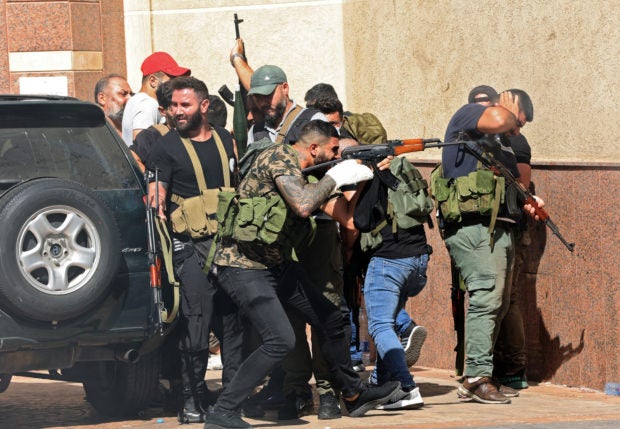 Fighters from Shiite Hezbollah and Amal movements take aim during clashes in the area of Tayouneh, in the southern suburb of the capital Beirut, on October 14, 2021. (Photo by Anwar AMRO / AFP)

“Hezbollah taking to the streets and throwing all its weight in this battle… could lead to big clashes and to the destabilization of the entire country,” he warned.

In the chaos, a limp body lying on a main street was carried away by rescuers as gunfire rained down around them.

Maha Yahya, director of the Carnegie Middle East Center, called the violence “a horrific reminder of unhealed wounds” from the civil war.

The man at the center of the tensions, Tarek Bitar, is seen as the last hope for justice by many Lebanese but has been condemned as biased and corrupt by political leaders.

The protesters Thursday torched portraits of Tarek Bitar but also of US ambassador Dorothy Shea, charging that the judge is colluding with Washington, on the day senior American diplomat Victoria Nuland was visiting Lebanon.

Washington called for “de-escalation”, and said, “the future of Lebanon’s democracy depends on the ability of its citizens to address the difficult issues…  with confidence in the rule of law.”

UN envoy to Lebanon Joanna Wronecka meanwhile urged “all sides to support judicial independence in the interest of the people.”

The Court of Cassation on Thursday turned down a lawsuit filed by two ex-ministers demanding the judge’s replacement, a court official told AFP on condition of anonymity.

But the investigator’s fate is all but clear as Hezbollah and Amal press ahead with a campaign aimed at removing him.

Read Next
Ex-governors vie for old posts in Cotabato, Agusan del Norte provinces
EDITORS' PICK
Legarda emphasizes role of ICC/IPs in nation building this IP month
Hong Kong to further tighten COVID-19 travel restrictions
Work-From-Home is here to stay and requires reliable logistics
Only 4,393 new COVID cases logged due to low number of tests
DOTr to defend proposal to increase passenger capacity in public transport
USAID Opportunity 2.0 calls for applicants for grants for out-of-school youth engagement
MOST READ
Bongbong says PH should modernize infrastructure to become Asia’s next logistics hub
Isko to critics after remarks vs Robredo: I’m sorry, this isn’t about Mr. Congeniality
Pacquiao plays 9-ball with billiards legends Bata Reyes and Django Bustamante
Martires asks why he is being singled out over issues on releasing SALNs
Don't miss out on the latest news and information.