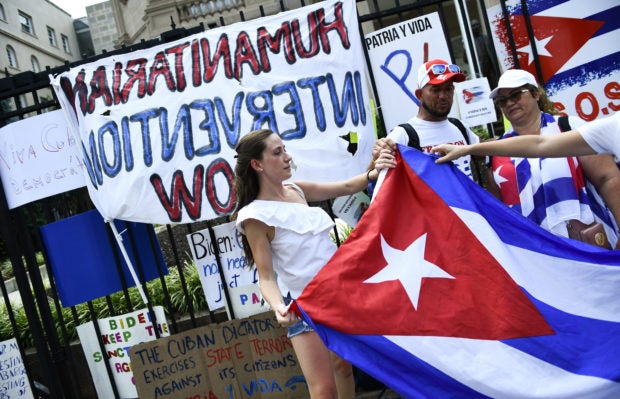 Protesters gather outside the Cuban embassy during a protest in support of continued anti-government protests in Cuba in Washington DC, on July 26, 2021. AFP FILE PHOTO

HAVANA — Cuba’s opposition said Tuesday it would move forward staging a November protest after the government rejected the move by claiming the organizers are backed by the United States and want to overthrow the regime.

The demonstrations would follow unprecedented anti-government protests that erupted on July 11 in around 50 Cuban cities.

“The promoters and their public representatives, some of whom have links with subversive organizations or agencies financed by the American government, have the clear intention of promoting a change in Cuba’s political system,” said the government in a statement on the official Cubadebate website.

Following the statement, organizers announced on Facebook that “on November 15, our decision will be to march civically and peacefully for our rights.”

The demonstrations, slated for six of the island’s 15 provinces, are meant as a call against violence and for change.

But the communist government said the reasons were illegitimate and constituted a “provocation,” adding that the new constitution adopted in 2019 states that the current socialist system is “irrevocable.”

The protest request published on social media pointed to Article 56 of the new constitution that protects the right to meet, protest and to associate for lawful and peaceful purposes.

“Even though that is a constitutional right, it cannot be exercised in detriment to other rights,” said the government in response.

‘Change for the better’

Film director Yunior Garcia, who organized the protest planned for Havana, hit out at the government’s reasons for refusing the requests.

“Whatever the Cuban does, they always say the idea came from Washington. It’s as if we don’t think, as if us Cubans don’t have any brains,” he said.

“Of course every sane Cuban wants change for the better, they want democracy in Cuba, more progress, more freedom.”

In Washington, State Department spokesman Ned Price said that the July outpouring on the streets “was not about the United States.”

“The prohibition on peaceful protest that we’ve seen, all of this reminds us that it is a Cuban people who are paying dearly in their fight for freedom, their fight for dignity,” Price told reporters.

The opposition protest was originally slated for November 20, but it was changed after the government last week declared that “National Defense Day” and said it would be preceded by two days of military exercises.

“We could not be irresponsible, we didn’t want any violence, we didn’t want Cubans fighting each other and we couldn’t send protesters into a street battle against the army that could respond with violence,” Garcia said.

The government crackdown over the July protests left one dead, dozens injured and more than 1,000 people detained, several hundred of whom remain behind bars.