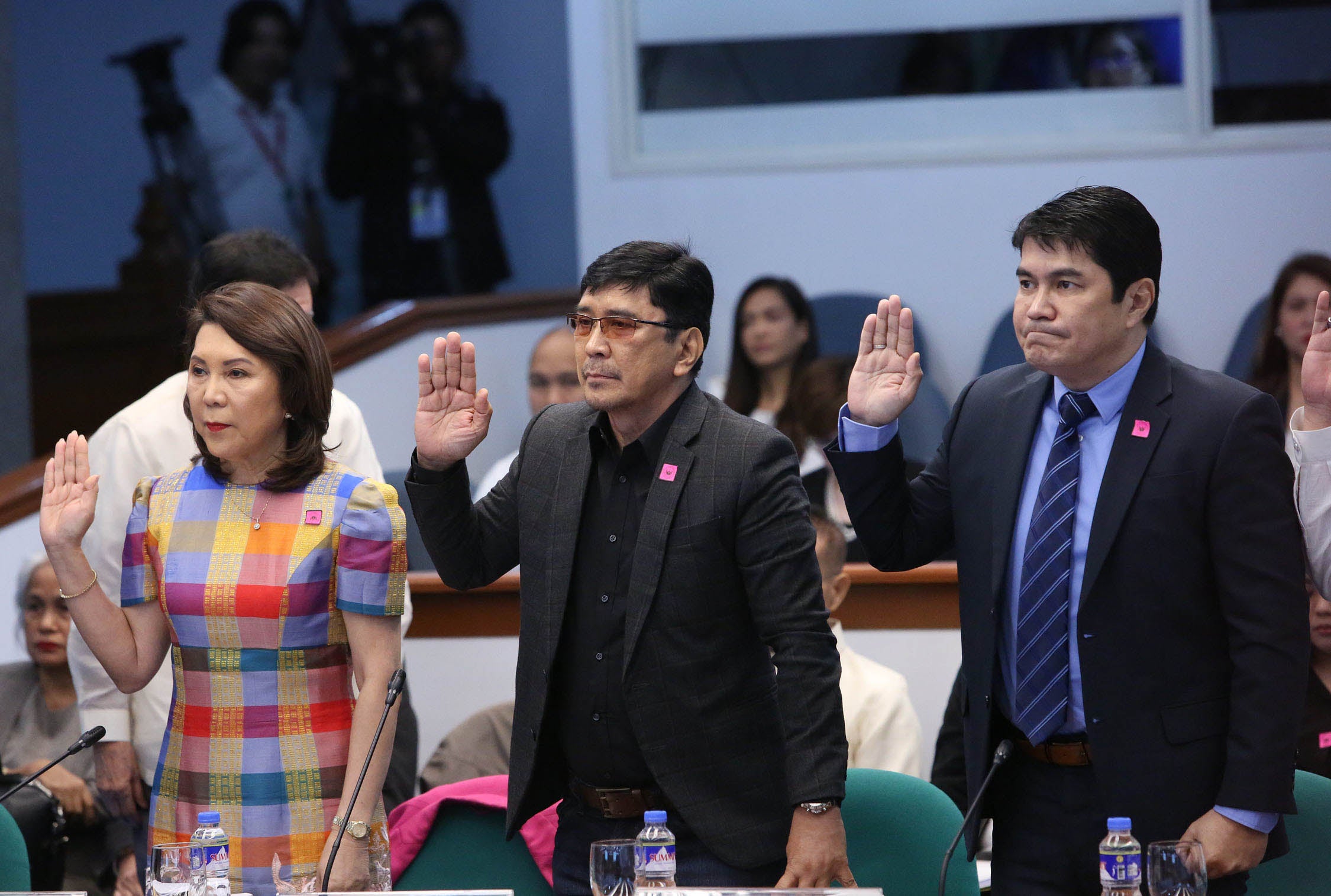 SIBLINGS UNDER SCRUTINY Former Tourism Secretary Wanda Teo, pictured here with her brothers Ben and Erwin Tulfo as they testify before the Senate blue ribbon committee in 2018, says “the rule of law is alive and well” after the Ombudsman cleared her and Ben along with four others of graft in the P120-million advertisement deal between the Department of Tourism and a PTV 4 show produced by Ben and hosted by Erwin. —INQUIRER FILE PHOTO

MANILA, Philippines — Citing lack of probable cause, the Office of the Ombudsman has cleared of graft former Tourism Secretary Wanda Teo, her brother Ben Tulfo, and four others in connection with a P120-million advertisement deal between the Department of Tourism (DOT) and the state-run People’s Television Network (PTV 4).

In a resolution approved by Ombudsman Samuel Martires on Oct. 7, it was found that there was no probable cause for the respondents in violating Section 3 (e) of the Anti-Graft and Corrupt Practices Act or “for conspiring with one another in giving unwarranted benefits” to Bitag Media Unlimited Inc. (Bitag), a media company owned by Tulfo, through “Kilos Pronto,” a daily news-magazine segment produced by him.

In 2017, the Commission on Audit (COA) flagged the ad deal with Bitag to air tourism segments on PTV 4 programs for conflict of interest and incomplete documents on the payments made to the network.

In their report released in July 2018, state auditors pointed out that “Kilos Pronto” received 75 percent, or P89.9 million of the P120-million deal, that took effect when Teo was tourism secretary.

Both Teo and Tulfo insisted there was nothing illegal in the agreement.

Teo told a Senate blue ribbon inquiry in 2018 that she had “diligently fulfilled the mandate” as tourism secretary and that the ad deal with PTV 4 had gone through proper channels.

In a statement issued on Tuesday, Teo said the Ombudsman’s resolution “shows that the rule of law and justice is alive and well in this beautiful country.”

Then Ombudsman Conchita Carpio Morales ordered a motu proprio investigation of the case in 2018.

Teo resigned as tourism chief shortly after allegations of irregularity were made public.

But in the 21-page resolution drafted by Graft Investigation and Prosecution officer Rosano Oliva on Sept. 30, the Office of the Ombudsman found “no conspiracy” in the ad deal.

“Nowhere was it directly shown that Secretary Teo was aware that ‘Kilos Pronto’ is owned by Ben Tulfo, her sibling. There is also nothing on record that then-Secretary Teo performed an overt act in pursuance of furtherance of the supposed complicity,” the resolution read.

The Ombudsman found that “the government got its money’s worth” from the deal and that “there is no undue injury to consider.”

“Based on the evidence on record, [Bitag] through the program ‘Kilos Pronto’ complied with its contractual obligations, even exceeding the airtime as agreed upon … Likewise the services provided by PTV/PTNI (People’s Television Network Inc.) in favor of DOT was the most advantageous as compared to the other television network,” the resolution read.

The COA had found that under the deal, the DOT was to make ad placements in PTV 4, of which P89.88 million, or 75 percent, was to go to “Kilos Pronto,” and the remainder to other PTV 4 shows.

The show was co-hosted by Erwin Tulfo, another of Teo’s brothers.

“Considering that the DOT secretary and the producer of ‘Kilos Pronto’ are siblings, there is a possible conflict of interest, which may be a violation of Section 3(e) of the Anti-Graft and Corrupt Practices Act,” the COA said in its report.

It noted that the DOT released the payments to the TV network without the required accomplishment and scheduling reports and proof of broadcast.

In April 2018, the COA flagged the DOT contract with PTV 4 stating that P60 million worth of ads had already been paid to Bitag without accompanying documents.

In a report on its audit of PTNI, the COA said there was no memorandum of agreement (MOA) between PTNI and Bitag to air DOT ads in “Kilos Pronto.”

With no MOA stating terms and conditions, “there was also no basis for the computations on how the said three payments were arrived at,” the COA said.

On June 5, 2018, the COA issued a “notice of disallowance” for the payments, which meant that Bitag should return the P60 million.

To that demand, Ben Tulfo replied: “We will return nothing.”

He said PTV 4 still owed his company an unspecified amount, and that there was no wrongdoing on its part.

Tulfo said Bitag had made even bigger earnings from other advertisers. “If we talk about the P60 million, that’s nothing. That’s just a pittance,” he said.

At the Senate inquiry, Teo denied knowing beforehand that “Kilos Pronto” was connected to her brother.

Tulfo said there was no conflict of interest as his media outfit had never entered into a direct contract with the DOT. Erwin Tulfo said he was only a “talent” in the show.

PTV 4’s Apolonio and Del Rosario both said it was the DOT that submitted a draft contract specifying that the ads be aired by “Kilos Pronto.”

Later they said it was PTV 4 that made the decision. —With a report from Marielle Medina, Inquirer Research