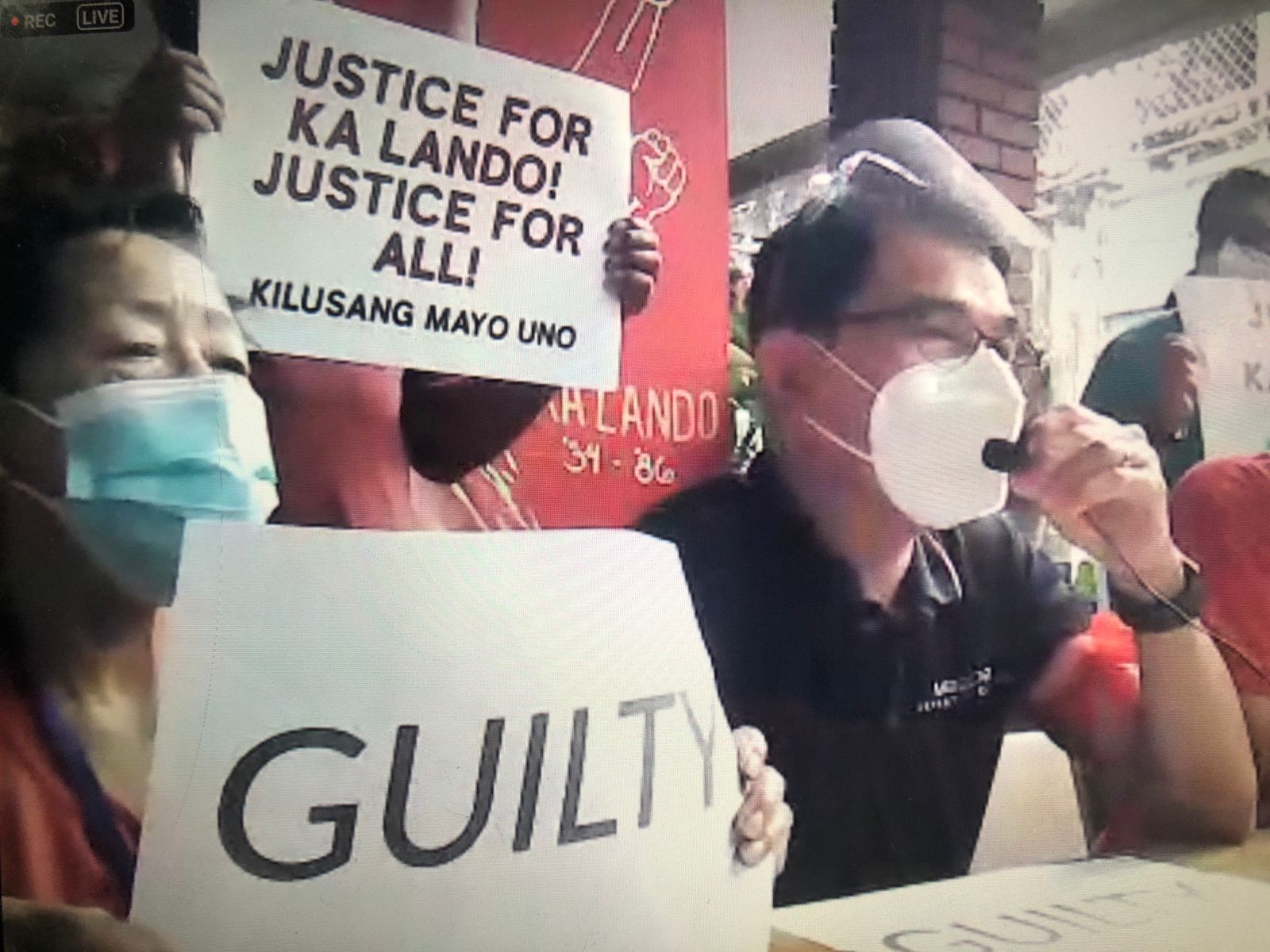 Found guilty for two counts of murder are Fernando Casanova, Dennis Jabatan, and Desiderio Perez. They are meted with the penalty of up to 40 years imprisonment (reclusion perpetua) and each is ordered to pay a total of P2.1-million civil indemnity and damages to the heirs of Olalia and Alay-ay. The three are the only arrested accused. One is detained in Rizal, the other is detained at the Cainta jail while the other one is detained at the Antipolo Jail.

One of the accused, Col. Red Kapunan, is currently the Philippines’ Ambassador to Germany. He was cleared in 2016 after the court granted his demurrer to evidence. A demurrer to evidence is in effect a motion to dismiss anchored on the ground that the evidence presented is insufficient.

The other nine accused are still at large.

“Our victory today has only stiffened our resolve to never abandon our search for the remaining nine men involved in our father’s brutal killing,” Atty. Rolando Rico Olalia, son of Ka Lando said in a statement.

How the court ruled?

Under Article 248 of the Revised Penal Code, a person shall be guilty of murder if any of the six circumstances are present.

In this case, the court said there is evident premeditation after a witness gave details about the planning and surveillance prior to the abduction of Olalia and Alay-ay in November 1986. Evident premeditation means there was an opportunity to reflect on the actions of the accused but still carried out the crime.

“There should be no doubt, therefore, that the qualifying circumstance of evident premeditation, has been satisfactorily proved,” the court said.

Another circumstance mentioned is the abuse of superior strength when three vehicles carrying more than 10 officers on board abducted Olalia and Alay-ay.

“The Court has carefully sifted through the volumes of records of these cases and is fully convinced that the prosecution was able to establish beyond reasonable doubt the guilt of the accused in these cases,” read the decision.

On the other hand, the witness identified Casanova as the one who took Alay-aya from his vehicle.

Jabatan, meanwhile was not able to complete his testimony due to problems with his counsel. Jabatan also said he was already given an amnesty by the National Amnesty Commission. But the court said the murder was not covered by the amnesty.

“Suffice it to say that ‘defenses of denial and alibi, such are inconsequential. Alibi and denial are inherently weak defenses and must be brushed aside when the prosecution has sufficiently and positively ascertained the identity of the accused as in this case. It is axiomatic that positive testimony prevails over negative testimony,” the court said.

The National Union of Peoples’ Lawyers (NUPL) said that while the Antipolo Court’s decision give relief, they still have the “tinge of frustration” as only three accused have been convicted.

“On the one hand, others who are allegedly involved – based on the disturbing testimonial evidence of the prosecution – remain off the hook and are in our midst. Nine of those formally charged are still at large despite 35 years on the run,” NUPL’s Atty. Edre Olalia said.

Olalia said, “for the families of the victims, the judicial proceedings from one court to another were too protracted, the legal tactics were over-utilized, and twists and turns at different junctures, levels and fora were exasperating.”

Teddy Casiño of BAYAN shares the same sentiment who, at a press conference, said: “This victory, while it is welcome, it is too little, too late.”

He called the decision “partial victory.”

Both Casiño and Kilusang Mayo Uno leader Elmer “Bong” Labog said the three who were convicted are only the foot soldiers.

“Only when Cirilo Almario, Jose Bacera, Ricardo Dicon, Gilbert Galicia, Oscar Legaspi, Filomeno Maligaya, Gene Paris, Freddie Sumagaysay, Edger Sumido—and all the other unnamed principals—who have managed to evade the long arm of the law have been found and brought before the courts to be held accountable for their crimes will justice be finally served,” Atty. Rolando Rico Olalia said.

What Went Before: The 26-year-old Olalia-Alay-ay double murder case