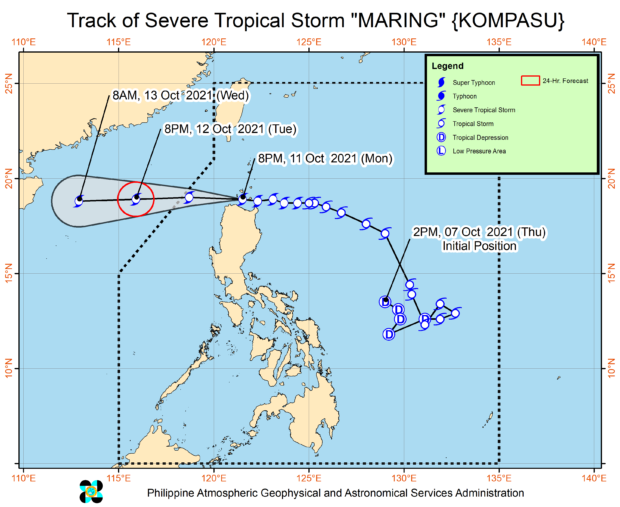 MANILA, Philippines — A security guard drowned in Cagayan province on Monday as Severe Tropical Storm Maring (international name: Kompasu) lashed northern Luzon with heavy rains and strong winds reaching 95 kilometers per hour near the center and gusts of up to 115 kph.

Police Brig. Gen. Steve Ludan, Cagayan Valley regional police director, said that Pedro Sanguilan, a 27-year-old guard at the port of Claveria town, was inspecting the causeway when he fell into the water and was swept away by huge waves.

His body was retrieved along the shoreline of Barangay Taggat Norte, also in Claveria, over an hour later.

In Baggao town, emergency responders began evacuating families in at least three low-lying areas in Barangay Taytay due to the threat of floods and landslides.

Cagayan Gov. Manuel Mamba ordered the suspension of online classes at the preschool, elementary and secondary levels for public and private schools.

Virtual classes were also suspended in Isabela; in some parts of the Cordillera provinces of Abra, Kalinga, Mountain Province, Apayao and in Baguio City; and in Ilocos Sur and Ilocos Norte.

Tropical cyclone wind signal No. 2 was hoisted over Batanes, Cagayan, the Babuyan Islands, the northern portion of Isabela, Apayao, Kalinga, Mountain Province, Abra, Ilocos Norte and Ilocos Sur, where “damaging gale- to storm-force winds” were prevailing or expected until Tuesday.

Read Next
Housing for cops, soldiers flagged for P 13-B excess cost
EDITORS' PICK
Only 4,393 new COVID cases logged due to low number of tests
Hong Kong to further tighten COVID-19 travel restrictions
DOTr to defend proposal to increase passenger capacity in public transport
Legarda emphasizes role of ICC/IPs in nation building this IP month
USAID Opportunity 2.0 calls for applicants for grants for out-of-school youth engagement
Work-From-Home is here to stay and requires reliable logistics
MOST READ
Bongbong says PH should modernize infrastructure to become Asia’s next logistics hub
Martires asks why he is being singled out over issues on releasing SALNs
Isko to critics after remarks vs Robredo: I’m sorry, this isn’t about Mr. Congeniality
PDP-Laban’s Cusi wing inks coalition deal with Reform Party
Don't miss out on the latest news and information.