Iraq arrests IS finance chief wanted by US ‘in Turkey’ 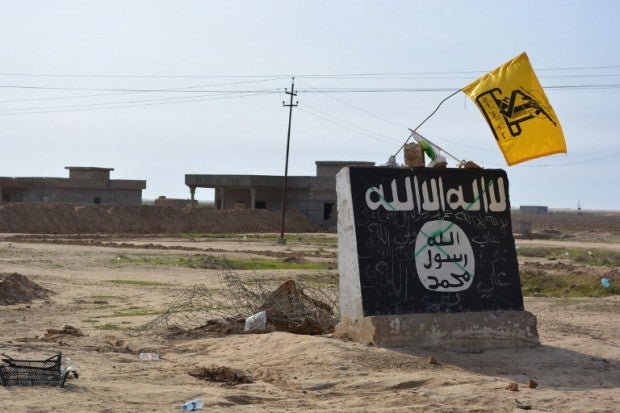 FILE PHOTO: A flag of the Shiite Hezbollah militant group flutters over a mural depicting the emblem of the Islamic State (IS) group in Al-Alam village, northeast of the multi-ethnic Iraqi city of Tikrit, on March 9, 2015, during a military operation by Iraqi government forces and tribal fighters to regain control of the Tikrit region from jihadists. After being forced out of the province of Diyala earlier this year, the IS jihadists are now fighting off a huge assault on the city of Tikrit as government and allied forces continue to work their way north towards the main IS stronghold of Mosul. AFP PHOTO / YOUNIS AL-BAYATI / AFP PHOTO / YOUNIS AL-BAYATI

BAGHDAD — Iraq has captured the alleged finance chief of the Islamic State group, Sami Jasim al-Jaburi, who was sought by the United States, in an operation abroad, Iraqi authorities said Monday.

Prime Minister Mustafa al-Kadhemi had earlier announced on Twitter that Jaburi was arrested by the intelligence services “outside the borders” of Iraq, in a “complex external operation,” without naming the location.

It was not immediately clear if Turkish authorities were involved and there was no immediate reaction from Ankara.

The US had offered a reward of up to $5 million for the capture of Jaburi.

The US Rewards for Justice program said Jaburi had “reportedly served as the equivalent of… finance minister (for IS), supervising the group’s revenue-generating operations from illicit sales of oil, gas, antiquities, and minerals.”

In September 2015, the US Treasury Department labeled Jaburi as a Specially Designated Global Terrorist.

IS took over one-third of Iraq in a lightning offensive in 2014, expanding their self-declared “caliphate” stretching across the Syrian border.

Iraq’s government declared victory against the jihadists in late 2017 after a grinding military campaign backed by a US-led military coalition.

Baghdadi was killed in a raid by US special forces in northwestern Syria in October 2019.

IS sleeper cells still periodically launch attacks in Iraq, against both the security forces and civilians.

According to an official from the US-led coalition who spoke on condition of anonymity, IS is now “stretched” financially and its operations in Iraq are “very localized.”