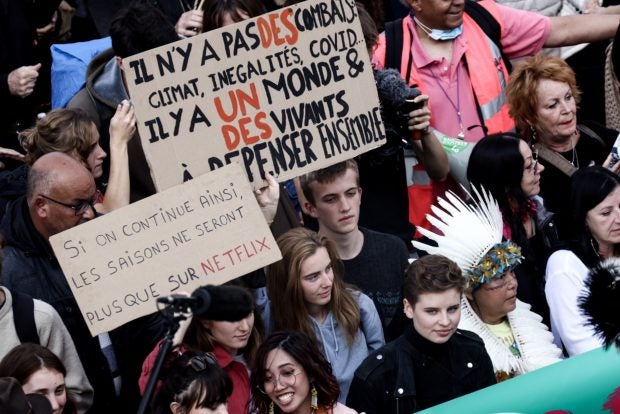 Climate activists Adelaide Charlier (C) and Anuna De Wever (3rd R) march with protesters holding placards reading “If we continue this way, seasons will only be on Netflix” (L) and “There are not fights, Climate, inequality, Covid…. There is one world and living beings to rethink together” during a demonstration against climate change in Brussels, on October 10, 2021, ahead of the COP26 climate summit. AFP

BRUSSELS — Tens of thousands of protesters joined the first major climate march in Brussels since the start of the coronavirus pandemic, weeks before a major climate summit.

Organizers said the number of participants was 70,000.

“It is time for systemic change with radical action.  It’s about the survival of humanity,” climate activist Anuna De Wever told VRT television.

About 80 activist groups under the banner “Climate Coalition” called for the protest, which saw Belgian politicians also taking to the streets.

“The climate is a socioeconomic story. We now have to stand up for the climate, the bill should not be paid by my generation,” said Conor Rousseau, chief of Flanders social democrat party Vooruit.

The protest took on an added significance after devastating floods in July killed dozens in Belgium.

“Politicians die of old age, Rosa died of climate change,” said one banner referring to a 15-year-old who was swept away by a river in July.

That meeting will see governments try to thrash out further commitments to limit the warming of the Earth to a maximum of 1.5 degrees Celsius as laid out in the 2015 Paris climate accord.