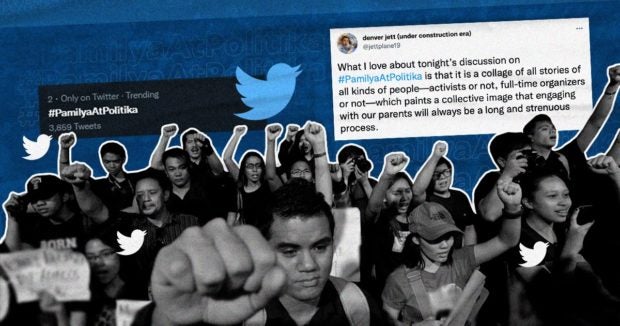 MANILA, Philippines — How should one engage their family in political conversations when they don’t necessarily share the same views—and what will one gain or lose from doing it?

A recent Twitter Space sought to address these questions with a discussion that provided a window into the struggles the youth face when they become open to their loved ones about their politics.

The six-hour-long online forum, titled “Pamilya at Politika,” dominated Philippine Twitter on Saturday night, rising to the second spot of the trending list and seeing over 1,500 listeners at its peak.

"The struggle is a protracted one. The power of the state and the influence of imperialism still cannot be minimized. What is needed is patience, humility, integrity, dedication, and patriotism.

Changing people is a long and difficult process."#PamilyaAtPolitika

Kelsey Hadjirul, one of the organizers, said last night’s virtual forum was the most successful one yet in terms of attendance and reception since their first Space last Thursday.

Chad Booc, one of the main speakers, said they organized the discussion to identify how the youth can encourage their families to join the wider political discourse, especially with the upcoming national elections.

(In a [previous] discussion, many users raised the question on how to talk to their parents who don’t share their views. We want others to know how to do it through listening to other people’s success stories.)

No stranger to political vilification, Booc has been constantly red-tagged by state forces, most notably by the National Task Force to End Local Communist Armed Conflict (NTF-ELCAC).

The government’s controversial anti-insurgency task force, which has P19-billion budget this year, has received the ire of various lawmakers who have been pushing for the realignment of its funds to aid people affected by the pandemic.

A Lumad school teacher for over five years, Booc was one of seven individuals arrested during a police operation on a bakwit school in Cebu City last February. Police claimed that the group, also known as the “Bakwit School 7,” were recruiting children to become armed combatants.

They were released last May after the complaints lodged against them were dismissed by the Davao del Norte provincial prosecutor for insufficient evidence and lack of probable cause.

Booc said that while his family remains worried for him amid the state’s various attacks, they have also given him greater support.

While the majority of the stories described being ridiculed and restricted by their families because of their political involvement, Hadjirul had it better—she said that while her mother still fears for her safety, she has also given her freedom.

(I always tell her that the love and freedom I get from her helps me in my activism. I am lucky.)

Last Saturday’s virtual forum, the organizers said, sought to dismantle the narrative pushed by the current administration and its forces that activism destroys families and equates to terrorism.

What I love about tonight’s discussion on #PamilyaAtPolitika is that it is a collage of all stories of all kinds of people—activists or not, full-time organizers or not—which paints a collective image that engaging with our parents will always be a long and strenuous process.

(Contrary to the disinformation by the state that being an activist is terrorism, activists are here to serve the masses and fight for societal change where no one is being taken advantage of and oppressed.)

(The stories in last night’s Space only proved how the youth and activists are trying to further strengthen their relationship with their families, because activism fights for the good of every child, every parent and every family being taken advantage of by the system.)

The youth will play a big role in the upcoming elections as they hold 52 percent of the vote, based on the most recent election data. For the organizers, the youth should support candidates who serve the interest of the masses and protect the welfare of Filipino families.

“We should do away with politicians who only produce more widows and orphans,” Booc said.