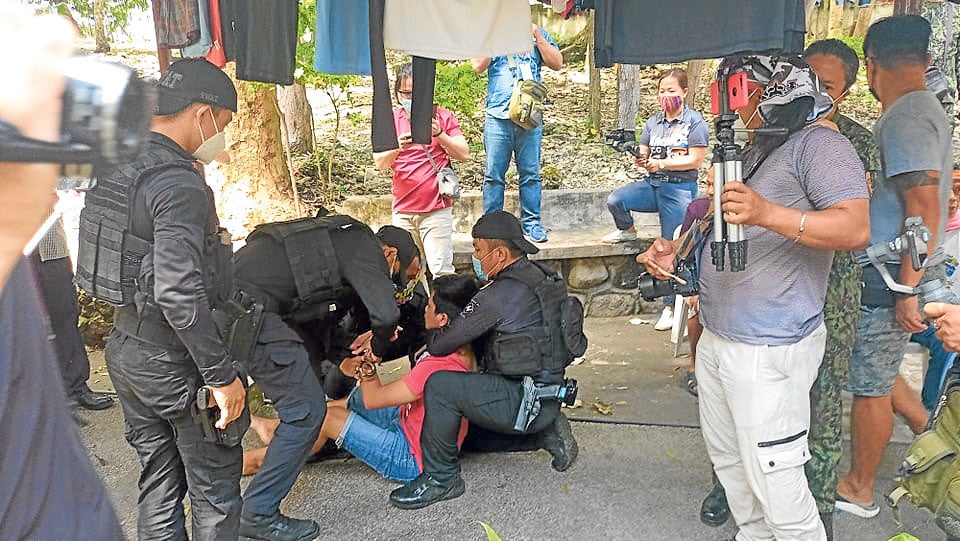 (FILE) MONDAY RAID Policemen in full battle gear subdue and cuff a man at the University of San Carlos retreat house in Cebu City, where they also arrested two volunteer teachers, five “lumad” teachers, and 19 Manobo minors who they claimed they were rescuing from communist “indoctrination and recruitment.” —NESTLE SEMILLA

MANILA, Philippines — The Davao del Norte provincial prosecutor has dismissed the complaints lodged against the so-called ‘Bakwit School 7’ for insufficiency of evidence, lack of probable cause, and for being outside the office’s territorial jurisdiction.

“It appears that there is insufficient evidence to support any of the alleged crimes of kidnapping and serious illegal detention, human trafficking, and child abuse,” the provincial prosecutor resolution stated.

The seven were among the 26 people rounded up in what authorities call a “rescue operation” of Lumad minors from a retreat house inside the University of San Carlos (USC) Talamban campus on Feb. 15.

The Lumad minors were from Talaingod, Davao del Norte. Their parents have allowed them to transfer to Sitio Tibucag, Barangay Dagohoy also in Talaingod after their school closed down. However, the parents alleged that they eventually learned that the minors were taken to Cebu.

For kidnapping and serious illegal detention, the prosecutor’s resolution stated that “not a singles witness” was produced to support their allegations. On the other hand, on allegations of child abuse, the prosecutor said while there is an allegation that the minors were indoctrinated in communist ideologies, the police failed to identify who, among the arrested seven were the ones who taught the ideologies.

For the complaint of human trafficking, the prosecutor said there is no evidence that it has been committed within its jurisdiction.

The dismissal of kidnapping and all other charges filed against the “Bakwit School 7” was welcomed by both the Cebu chapters of the National Union of Peoples’ Lawyers (NUPL) and the Save our Schools Network (SOSN).

“The dismissal of the complaints […] validates our firm assertion that the persistent red-tagging efforts on Lumad schools by the State forces are baseless and unfounded,” NUPL-Cebu, who represented the Bakwit School 7, said in a statement.

The group further stressed how indigenous peoples have long been victims of state terrorism “because of their long history of struggle against the exploitation of their ancestral lands.”

Posted by National Union of Peoples' Lawyers – Cebu Chapter on Thursday, May 13, 2021

According to the police, the alleged rescue operation was conducted after parents of at least six of the indigenous children sought the help of authorities, claiming their children were taken without consent.

However, SOSN said the parents authorized the volunteer teachers to allow the children to join the “bakwit” school, a learning center for refugees who fled the increasing militarization in Mindanao.

READ: Lumad Bakwit School: A school on the run

In a statement on Friday (May 14), SOSN-Cebu hailed the decision as a “testament to the legitimacy of the calls of the Lumad and the existence of the bakwit school,” as it also called out the government’s controversial anti-insurgency task force for peddling lies.

“Time and time again, it becomes evident who the true enemies are in the quest for quality education and self-determination of our Lumad brothers and sisters,” it added.