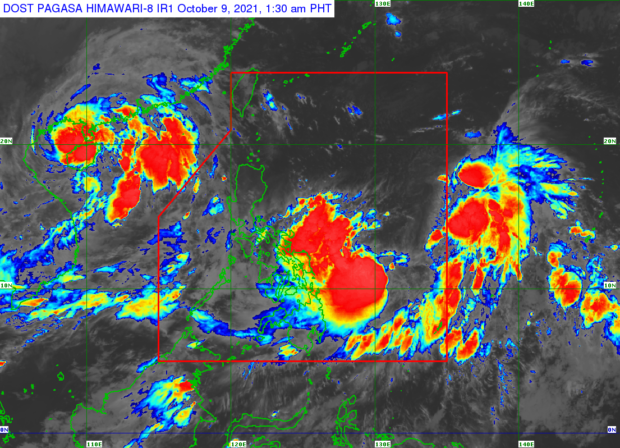 MANILA, Philippines — Weather disturbance “Maring” intensified into a tropical storm on Friday night while the storm outside the Philippine area of responsibility (PAR) now entered and was given the local name Nando, state meteorologists said.

In its latest update, the Philippine Atmospheric, Geophysical and Astronomical Services Administration (Pagasa) said Maring was packing maximum sustained winds of 65 kilometers per hour (kph) and gustiness of 80 kph.

It was last located around 715 kilometers east of Borongan City, Eastern Samar, and was moving east-northeast at a speed of 15 kph.

Pagasa initially predicted Maring to weaken and dissipate as a low-pressure area or LPA, which remnants were seen to likely merge with Tropical Depression Nando. Its further intensification was not forecast by the state weather bureau.

In contrast, Pagasa said it sees Nando dissipate as an LPA by Sunday night.

READ: TD Maring seen to weaken into LPA, but may merge with storm outside PAR

It is moving west-northwest at a speed of 20 kph.

Pagasa’s latest intensity and track outlook showed that Maring is no longer expected to turn into an LPA, as it would instead start moving northeast before making a northwest turn that would put Batanes and the Babuyan Group of Islands on its tracks.

By Saturday night, Maring would have already intensified as a tropical storm, and then a severe tropical storm between Sunday night and Monday morning.

Maring is expected to move over Batanes or the northernmost tip of the country, but its cone of probability or the possible areas it may hit is still large, as it may veer south down to the southern part of the Cordillera and Ilocos Region, or up north towards the southern part of Taiwan.

Despite the possibility of landfall not yet ascertained, Pagasa said there is a chance that Tropical Cyclone Wind Signal No. 2 may be raised over provinces in Northern Luzon.

Currently, gale warnings have been raised over the coastlines of Batanes, Calayan, and Eastern Samar, which means small boats and fisherfolk are not advised to set sail.  The remaining waters of the country would have a moderate to rough sea condition.