TD Maring seen to weaken into LPA, but may merge with storm outside PAR | Inquirer News
Close
menu
search

TD Maring seen to weaken into LPA, but may merge with storm outside PAR 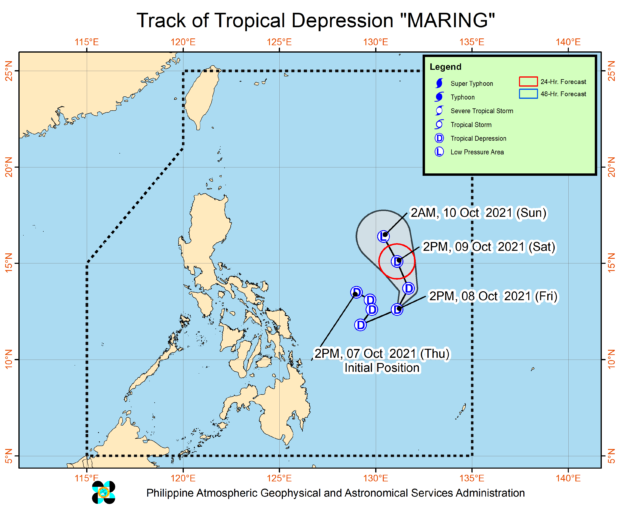 MANILA, Philippines — Tropical Depression Maring which is currently over the waters east of Eastern Visayas is expected to dissipate into a low-pressure area (LPA) over the weekend, state meteorologists said.

However, weather forecasts from the Philippine Atmospheric, Geophysical and Astronomical Services Administration (Pagasa) on Friday afternoon showed that Maring’s remnants or the cloud clusters might join up with the tropical depression outside the Philippine area of responsibility.

According to Pagasa, the storm outside PAR is still expected to enter the country’s waters by Saturday afternoon.  As of now, the tropical depression outside PAR has maximum sustained winds of 45 kilometers per hour (kph), and gustiness of up to 55 kph.

It is currently moving north at a speed of 25 kph.  Once it enters PAR, it will be given the local name Nando.

(Our assessment of typhoon Maring has changed drastically since now we are expecting it to become a low-pressure system within 36 hours.)

(The remnants of Typhoon Maring may already have mixed in with the circulation of Typhoon Nando.)

Pagasa’s forecasts showed that the tropical depression outside PAR may continue moving north, before making a steady eastward movement placing the country’s northernmost island group in its tracks.

However, the cone of probability is still big, which means the storm may veer south towards the Cagayan Valley and Cordillera, or move northward near Taiwan.

By Saturday afternoon, it may have intensified into a tropical storm, and eventually into a severe tropical storm by Monday afternoon.  While no tropical cyclone wind signals may be raised, Pagasa said that it may place certain coastlines under a gale warning due to strong winds.

Despite Maring’s weakening, Pagasa still warned about possible light to moderate rains with at times heavy rains over Bicol Region, Eastern Visayas, Caraga, and the provinces of Cebu and Bohol due to the trough of the storm.

For Saturday, a similar scenario may prevail over Occidental Mindoro, Palawan, and the rest of Visayas.