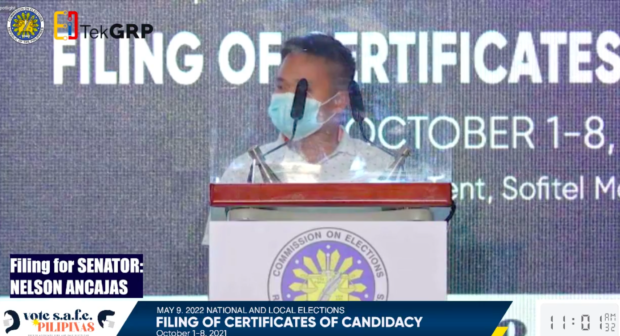 MANILA, Philippines — An aspirant for a senatorial seat was overwhelmed with emotion during the filing of the certificate of candidacy (COC) on Wednesday, venting frustration over the slow pace of government assistance.

Nelson Ancajas stressed that Filipinos are not lazy, but the current system in the country is filled with several shortcomings.

Specifically, he narrated the challenges he confronted, such as when his child died because of the delay in government assistance.

(2008, I fought as a parent. I had to give my child a chance to live. We, Filipinos, are not lazy. We are hardworking. Only the system has a problem.)

(As a parent, I’m here to listen to the voices of ordinary Filipinos. In 2008, I had a child. Three to four months only and he/she died.)

(If I ask for help, the process is lengthy. The person will already die before the assistance reaches us.)

He also had a child this year and is currently suffering from a disease like his first baby.

(You know, as a parent, we will do everything for our child. I’m an ordinary Filipino, I want my child to live. I cannot rely on the government.)

(I am hardworking. I graduated from a four-year course, majoring in management. But how? It’s hard to move forward.)

Hence, his platforms include 24/7 complaints against the government, 24/7 job applications, 24/7 medical assistance, and alleviating the financial woes of the marginalized sector.

Early on in his speech, he questioned authorities over the delay in the disbursement of assistance.

(What will you do with the government’s help if it will arrive when the person in need is dead?)

(Why would you be selfish when the money is for Filipinos? You, politicians that are not your money. That’s why they should receive what they deserve.)

Ancajas shared that he already climbed public transport vehicles just to collect money for his children.

He also took the chance and appealed to the public to help his child.