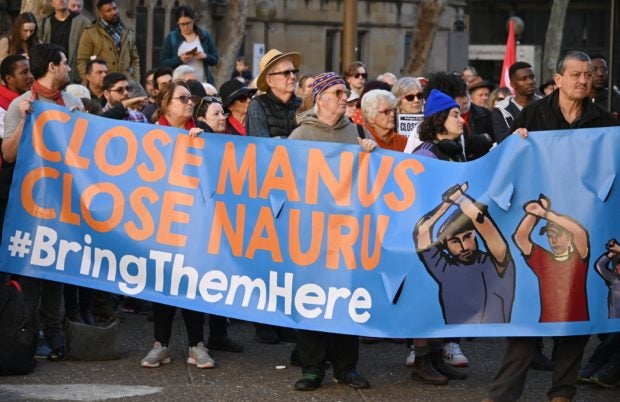 Demonstrators gather at a protest rally to demand humane treatment of asylum seekers and refugees in Sydney on July 20, 2019. AFP FILE PHOTO

SYDNEY — A longstanding deal that saw Australia detain asylum seekers in an offshore camp in Papua New Guinea will be scrapped, the two countries announced Wednesday.

Under Australia’s hardline immigration policies, migrants attempting to reach the country by boat have for years been sent to detention centers on Papua New Guinea’s Manus Island and the Pacific nation of Nauru.

On Wednesday, Australia and PNG announced their so-called “regional resettlement arrangement” would officially end on December 31.

But it does not spell an end to Canberra’s much-criticized approach to migrants who arrive by sea, after Nauru last month committed to continuing to accept Australia’s asylum seekers.

Manus Island was quietly emptied of detainees in late 2019 but Refugee Action Coalition says about 100 people remain in Port Moresby.

In a joint statement, Australia and PNG said that finalizing their deal would realize “a long shared objective”.

“From 1 January 2022, the PNG government will assume full management of regional processing services in PNG and full responsibility for those who remain,” the statement said.

“PNG will provide a permanent migration pathway for those wishing to remain in PNG –- including access to citizenship, long-term support, settlement packages and family reunification.”

Those who want to leave PNG will be transferred to Nauru or resettled in a third country, it added.

Australia’s policy of turning away women, children and men fleeing war zones and detaining them in Pacific camps has been widely condemned by refugee advocates, rights groups and the United Nations.

Hundreds of others are believed to have been resettled in the United States under a deal between Australia and then-US president Barack Obama.