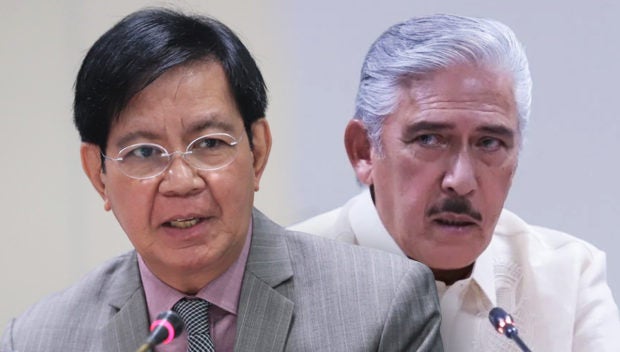 MANILA, Philippines — Senator Panfilo Lacson and Senate President Vicente Sotto III were still deciding on their senatorial slate for the 2022 national elections, targeting to come up with a final line-up after October 8, when the filing of certificates of candidacy (COCs) is ended.

Sotto said Wednesday that trimming down their list was such a challenge as they were considering 14 aspiring senators.

(Actually, with due respect, as of this morning, we’re over the limit. We’re looking at 14 candidates, which is why we can’t immediately mention who the 12 are because we are considering and talking to 14 candidates.)

“And ang plano namin (And our plan is), after the filing, which is after October 8, then we will finalize the 12 that we will be endorsing,” he added.

Sotto’s explanation came after Lacson was asked about their senatorial pick as they have previously mentioned considering including two newcomers in politics as surprise bets.

Lacson said they are in the midst of discussions about their senatorial line-up as they expect their respective political parties and alliances — the Partido Reporma which he chairs, the Nationalist People’s Coalition which Sotto chairs, and the National Unity Party which former Interior Secretary Ronaldo Puno leads — to each field own senatorial candidates.

He also said they are still talking to former vice president Jejomar Binay, who already declared intention to run for senator in next year’s elections. It was unclear, however, if such talks were just about inviting guest candidates, or a full-blown coalition between the above-named parties and Binay’s United Nationalist Alliance (UNA), or a mere tie-up against electoral fraud.

(And the other day, we were talking to former vice president Binay, who would also file but under UNA, so that is the broad coalition — not really a coalition, but more of an alliance — wherein it was discussed that the bottom line is ensuring that the upcoming elections are clean, orderly, and free from fraud.)

According to Lacson, fears of election fraud were due to concerns that automated elections may be vulnerable to cheating.

But aside from the parties mentioned, he said that former senator Bongbong Marcos, who has filed his own COC for president, has expressed intent to join the alliance.

(Senator Bongbong Marcos also talked to the vice president — I mean Senate President — about possibly joining our advocacy to ensure the cleanliness of our elections this coming May 9.)

Earlier, Lacson and Sotto filed their respective COCs for president and vice president before the Commission on Elections.  According to the tandem, their primary focus would be on working to restore the Filipinos’ trust in government.

Read Next
Ex-defense chief files COC for president
EDITORS' PICK
A delightful blessing!
Gov’t plans to open COVID-19 vaccination for 5- to 11-yr-olds by January 2022
Gov’t eyeing COVID-19 vaccine booster for essential workers, indigents by Dec. 10
Villar Group gears up for AllValue Shopping Party on Dec. 3; around P 1-million promos and discounts up for grabs
Omicron variant detected in more countries as scientists race to find answers
Legarda: Ending Violence Against Women, a cause for all
MOST READ
Omicron poses ‘very high’ global risk, countries must prepare–WHO
Quiboloy warns of ‘much worse than Omicron virus’ if his ‘persecution’ is not stopped
Bongbong Marcos’ conviction in tax case not a crime involving moral turpitude — lawyer
Marcoleta defends pol ads on ABS-CBN
Don't miss out on the latest news and information.