Atienza: Don’t vote for me as VP if Manny Pacquiao is not your president | Inquirer News
Close
menu
search

Atienza: Don’t vote for me as VP if Manny Pacquiao is not your president 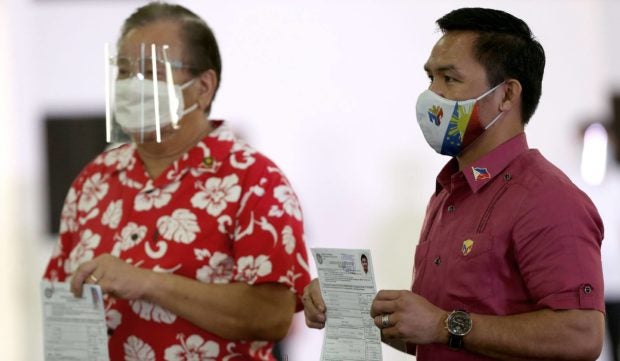 MANILA, Philippines — Vice presidential aspirant Lito Atienza asked the public Wednesday not to vote for him if they will not choose Senator Manny Pacquiao as their president in the 2022 national elections.

During the Kapihan sa Manila Bay press forum, Atienza said he would be a “useless” vice president if Pacquiao will not be elected as president, adding that the public should cast their vote for a tandem so that they can work well together.

The tandem of Pacquiao and Atienza will vie for the presidential and vice presidential post in next year’s elections. Both of them have filed their certificate of candidacy.

“I don’t want to be vice president to any other president. I am running for vice president, only because Manny Pacquiao has my full trust and confidence,” Atienza said.

However, he appealed to those who will vote for Pacquiao to give him their vice presidential vote.

“I don’t want to win by myself. I would be a useless Vice President, useless… But if you want me to be effective and you want to vote for me, vote for Manny Pacquiao. That’s the very reason why I am running for vice president—to be of help to him,” he added.